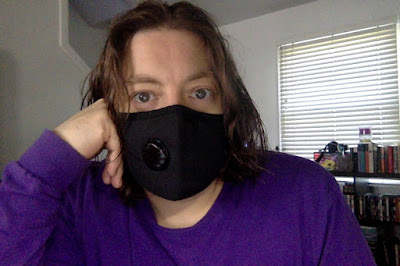 Though I still don't "know" if I had Covid-19 because I would have had to drive 3 hours round trip to get the only test in the area that they will give you if you have zero symptoms (and at no point during was I up for that), what I had tracked with CV-19 symptom stories that I'd read (the onset, the fever, the cough, the remission and recurrence). I probably would test negative at this point regardless as it has been something like two weeks since I had a full-blown symptom. Now I have to wait for an antibodies test and maybe I will be shocked or maybe I will say “Yep. Thought so.”

My experience was "mild" compared to the things I've read and some of the horror stories. But as the continuum seems to go from "asymptomatic" to “fatal,” that's not really saying much. I want to stress that even though it was milder than most of the stories I'd read about, and I was better by day seven instead of having to go the full two weeks, it was not MILD mild. It was not objectively mild. I wouldn't call it "mild" compared to other times I've been sick.

And if it WERE, I would characterize it as the second WORST flu I've ever had. (I got influenza about four years ago that went on for like five days of really bad symptoms, and I couldn't keep down water and was starting to get dehydrated, and that was the closest I've ever come to calling an ambulance.) I was bedridden most of the time

I started taking antipyretics (Tylenol mostly) when my fever reached 103.5. I run about 98 on average (not 98.7) so that's FIVE AND A HALF DEGREES. That was the length of time it took me to drive home from the first moment I realized I was sick in Oakland to Richmond 15 minutes away. Or to break it down for you, my temperature was going up by a degree every three or four minutes.
Even with Tylenol, I only got it down to 100 on the first day.

After that, any time I woke up (from spiking fever) after my meds had lapsed, it would already be at LEAST 101. I would immediately take something, but in the 20 minutes before it kicked in, it could go up as much as two degrees.

Everything ached those first couple of days––deep and painful. I tried not to move much.

At first, the cough came with the fever, and I thought I might have had something else. As long as I kept the fever down, my cough was okay. But on the third day the fever broke and the cough made its own visit. It was not like a chest cold. It was not like the flu. It was like something was living in me and it had to get out. Coughing jags would be so long and terrible that I would lose my balance or throw up. I used something like two or three huge packages of cough drops.

When I would breathe deep, it HURT. It felt like burning. And an uncontrollable cough would ALWAYS be proceeded by a deep hitching breath. So all my coughing included a deep, spike of pain.

Around day five the cough faded. I was left with a lingering hack to get the crap out. I'd read enough to know the worst was coming, so I didn’t relax or let my guard up. Fortunately, for me, I never did get the day 6-9 "boss fight." From what I understand, most people have their fever return and a much worse relapse.

By the end of the sixth day, even the persistent little hack to get the gunk out had begun to fade. (My cough actually faded faster than most chest colds I ever have.) I waited for a couple of days, sure I was not yet out of the woods, but nothing more happened.

This thing moved. It was fast. It came back after going away. (And all sickness does this a little but this was more like "I'm better! Maybe I never ever had–– OH MY GOD NO I'M NOT!") And the symptoms kept changing.

It was NOTHING like the flu. Please take care of yourselves and take the steps you need to make sure that people who are vulnerable don't get this.
at April 22, 2020 5 comments:

Killing Millions to Own the Libs

They really DON'T get it.

But the NORTH star––the main guiding principle––of conservative ideology in this country is "Fuck Liberals." If science has some questions about creationism and grave concerns about global warming that might require some regulations, "fuck science." If the truth keeps being inconvenient, and the media insists on reporting it, "fuck the media."

And Republican leadership, to their eternal shame, have chosen to exploit this instead of build a cohesive ideology that can incorporate facts. They encouraged Fox news to be basically the propaganda arm of the Republican party instead of a news network, and enjoyed the political expediency of assuming science was wrong.

It worked SO well that it became their most distinguishing feature. Out of a field of twenty, they picked as their avatar and leader the pathological liar who doesn't so much make any cogent or salient point as talk about how smart and great he is and slavishly attack everyone around him who hurts his fee-fees. The guy who literally bragged about his LACK of integrity on the campaign trail when he wasn't putting his bigotry front and center.

And sure enough, his huge-yet-diaphanous ego and contempt for the media and science became the holy trinity on display as he wasted precious times. Because sadly this is like driving an old car without power steering and power brakes and power everything––the result is delayed from the action. Where we are RIGHT NOW is a result of what we were doing about three weeks ago.

Which, of course, every epidemiologist already knew. And told us. And jumped up and down. And screamed. And were kind enough to explain exactly what we needed (like widespread testing and numbers beginning to dip) to lift the restrictions.

Cheerfully ignored because "fuck liberals." And like every person or institution who says something Trump doesn't want to hear (regardless of its demonstrable veracity), he attacked the WHO for pointing out that we aren't anywhere CLOSE to ready.

So Republicans lasted pretty much almost exactly the three weeks it would take to see progress from the efforts we made in March.

And proceeded to ignore the body of medical experts who said exactly that and that we were not out of the woods. (Because fuck liberals.)

ALREADY they want to reopen everything––it's all better, right?

They think the scientists and media are overblowing the threat (to attack Trump). They think shelter in place is just some overcautious bullshit that only liberals and liberal scientists and liberal media want (because we all enjoy wondering how we're going to pay rent, I guess). So now the progress we have eked out in flattening the curve BECAUSE we were social distancing and Sh.I.P.-ing is about to be lost––because like everything else in the environment Republicans created, Covid-19 (and particularly its response) was insta-politicized.

Sadly Republicans have the power in a lot of situations. And where Trump lacks the “absolute authority” of two days ago, he is now writing tweets of stochastic terrorism that the people in swing states with Democratic governors should be “liberated”— liberated from their democratically elected governments I guess. Republicans have the authority in MANY places to lift restrictions, and even folks who are aware of the danger and who think that sacrificing millions on the altar of the Dow Jones Industrial Average can get bent are going to have to decide if they're going to go back to work or get fired.

Perhaps the worst part is that we won't be able to see the "hotspot" consequences of what they are doing until about three weeks from now. Long after it will be too late for the measures that can still work early (like Sh.I.P.) to be effective.

Because instead of a paradigm that could handle facts and work within the margins of what is demonstrably true, Republican leadership found it politically expedient to make the defining characteristic of conservatism "fuck liberals."
at April 17, 2020 1 comment: