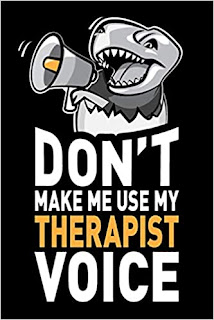 Many of my personality traits come through in their own distinctive voices. The voice of caution is my mother's. Patrick Warburton encourages me to go for it. Chris Hemsworth's voice tells me I'm still worthy. Mr. Rogers reminds me to be kind.

I also often hear therapy things in therapy language in my therapist's voice. She used to hip check my bullshit with "What would it feel like if...."

It was....a theme. So even though I wrapped up my last session nearly a year ago with her looking at me and telling me that she thought I was going to be okay and I had her number if I ever wasn't, I still think of things like my boundaries or asking for what I need in a very "What would it feel like...." kind of way. In fact, I think she might have said, "What would it feel like if this were our last session unless you have a specific need in the future?"

Anyway, I was driving home the other day, thinking about how hard any semblance of dating is during Covid-19, how lonely I’ve been living alone with only really my nanny clients for company, and how long it seems Shelter in Place will remain a factor in our lives. And then, I heard her voice...clear as if she was sitting shotgun.

"What would it feel like if you just planned for a year without a primary partner?"

Now...I should pause here. I have a very active imagination, and I can **practically** hear a lot of things. Voices. Sound effects. Morgan Freeman narrating my life with just a twinge of disappointment at my every choice. But except for a few phantom strains of music when it's very VERY quiet, I don't often break out the full-fledged auditory hallucinations. And I've been having just a weird enough couple of months because of isolation to worry about this. So I spent a few minutes on the phone getting grilled about mania and blood clots by my doctor so I could be extra peace of mindy. (Probably no big if I don’t hear it three times a day, I have a full conversation with it, or it doesn’t suggest violence––if you were wondering.)

But in the moment, I just started answering. Like, literally talking to myself in the car. THAT part is pretty normal for me…when I’m not acting out entire scenes from my stories in the car.   With Oscar performances.

But anyway, I answered: ”Well, I'd probably get more writing done. I would be free of some distractions with figuring out what the hell is going on in my spiritual life. I'd have a little more bandwidth for job two. Gaming. Working out."

"But mostly," I told 'her,' "I think it would just kind of be this emotional expectation lifted. Like, I could just fucking concentrate on other stuff. Like it would actually bother me less to be alone if I were more actively engaging an idea that that's just not a thing. I'd have this year where I'm just like, that's not what I'm doing with my life right now. Wouldn't hiss at it if it showed up, but just put that energy somewhere else. It would be nice just not to feel so…disappointed all the time.”

And suddenly that felt SO comfortable. That was...IT. That was the answer. In a flash and a moment, I was excited about my next year (“Oh the places I will go!”), and just taking the time to put energy somewhere else. Just letting all the pressure and expectation float away. Put all that crap on pause. Maybe next year I'll worry about noodling my OK Cupid profile, if I’m putting enough effort into flirting, or spending time  facing a mirror and thinking about my desirability quotient. For now I just have other shit to do, and I'm going to do it, and unless someone shows up at the front door saying, "I am for you, Chris Brecheen" (hopefully holding a pizza), I'm just not going to worry about it.