If You Don't Believe THIS, I'll Unfriend You 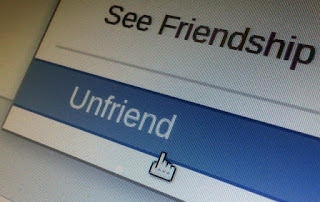 I have spent several days thinking about how to write this. And as with most things, I have decided that the best thing to do is simply to be open, honest, and authentic. For my part, the only “polemics” I will engage in here will be to tell the story slightly out of order, so please bear with me if you don’t immediately see where I am going.

Within abuse, there is a concept called DARVO (Deny, Attack, Reverse Victim and Offender.) Basically one of the first things an abuser is likely to do if their victim ever escapes their control or might go name and expose what is going on is to claim that THEY WERE THE ONE who was abused.  (One of the reasons I point at the current GOP leadership as a macrocosm of abuse is because they do this on the social level, but that’s a rant for another time.) Abusers often engage in DARVO when they can no longer control their victims. They launch smear campaigns. They bring up the culmination of “Baiting and Bashing” out of context. (That’s when they are awful for a sustained period in order to provoke a reaction so that they can claim their victim is “mentally unstable” or always angry or something. (For example, they might ignore someone’s wish to walk away, follow them into a room with a locked door, physically corner them, and try to hug them and then when the person pushes them aside with the strength necessary to move a human that is refusing to move, they would say the person was “violent and shoved them.") But sometimes DARVO isn’t even a twisting of truth. Sometimes it is invented whole cloth. And it means that if someone comes up to you and tells you a TERRIBLE story about their partner’s abuse, it might be true. And it might be them trying to get to you first and control the spin on the story.

If you’ve paid attention, you know I’ve been emotionally and mentally abused in the past (probably by malignant narcissists, but I’m not qualified or in a position to diagnose). I have done YEARS of therapy to have better boundaries and less codependency.

Except for my step-father, my abusers have all been women. I try not to derail discussions of gendered abuse for it is a particular phenomenon that requires its own space and own discussions and its own examination of entitlement and social power differentials, but it can be painful to have my story erased when I see certain absolutist “slogans” go beyond the simplicity of their slogan context and into full praxis with some folks, all while ignoring the nuance of my lived experience.

This isn’t actually a post about DARVO, but it is a post about my incredible relief that when (some) people who loved me heard certain stories from my abusers, they trusted the person in question was a human capable of relaying their own lived experience, then went to verify the information, and found it to lack credibility or at least context. (In some cases, absolutely made up whole cloth in a way that wasn’t even plausible.) Of course, not everyone believed, and that bothered me. And not everyone everyone verified, and that bothered me too. Some people just trusted my abusers. Perhaps because I’m a guy. Perhaps because my abusers got to them first. I lost friends.

And when I was trying hard to encourage everyone to hear both sides, that was particularly painful.

I am also a victim of sexual assault. While in one case, my “No,” and even “Please stop,” was ignored, and in another a smirking sheriff’s deputy told me the next morning that maybe I shouldn’t look a gift horse in the mouth, most of my experience was mental and emotional coercion. I knew if I said “no,” there was going to be a fight. A tearful, painful fight about whether or not I found her attractive anymore. It would go on for hours. It would involve wailing cries and hitching sobs. And sometimes I let sexual things happen because the fight was worse. It felt awful, but it would be a decade and a half before I learned exactly why I felt so violated and how to name what had happened. One time, as Die Form chanted “synthetic flesh” and I let my body be used, she stopped suddenly, and matter-of-factly told me all about how “passionate” a person she was, and that she fed off my own “passion” so it was important to her that I got involved and encouraged her with my reactions. (And if that sounds like “Could you pretend to be enjoying it,” it should.)

I still can’t listen to “Doctor X” without feeling deeply anxious and without reliving that moment.

And so, while many of my friends have maintained integrity, it has been an incredibly difficult experience, these last several weeks, watching several of them react to Tara Reade accusing Joe Biden of sexual assault with either “Trust implicitly” or “Apply outlandish levels of skepticism" based, from what I could tell, primarily on their preexisting feelings about Senator Bernie Sanders and/or Blue No Matter Who. A stark mirror of two of of the worst and most hurtful experiences of my life have been, for their political expediency, either ignored or shouted-out respectively.

(To be clear, I don't think Reade is an abuser, certainly not of Biden, which is not why I brought up DARVO. DARVO was just front and center during the times in my life when I can think of that people were undertaking smear campaigns involving outright lies against me. It is what I think of when people insist on "trust," but are hostile to any attempt to "and verify.")

I know better than to point fingers. People would be incensed and (righteously) indignant at the accusation that their interpretation was anything but meticulously considered. Personally, I don’t think the court of public opinion has the tools necessary to condemn OR exonerate anyone over a decades-old story, and most people just run it right through their biases. But mainstream journalists investigating old claims are not immune to social narratives that silence victims, and the legal system practically shelters sexual assaulters. It gets so messy. And there’s a tendency to feel that only the court of public opinion holds any power.

Still, it’s hard not to notice that two of my greatest traumas have become a “great taste/less filling” shouting contest in the #neverBiden struggle. My own feelings on the matter are filled with rough edges and complications, and I’m still not ready to share them with the world. (Trust that I will overcome my personal revulsion as I vote for the health care without which I would be dead and kids NOT in cages.) And I can RESPECT either edge positions as easily as something more middling and messy like I have. I don’t expect survivors to vote for people they think might be assaulters if they can’t. I don’t expect folks who’ve seen political smear campaigns stoop to any level not be dubious.

However, some people have taken to saying that if they so much as SEE the opposing viewpoint on another person’s wall, they will begin unfriending. “If I see anyone stanning for Biden, I will just block them.”  Or, “If you believe Reade, just unfriend me now.”

I get it. People want to feel safe in their own spaces. I know how social media gets, and there are issues (Swerfs, Terfs, homophobia, sharing that fucking Plandemic video) where I can’t really say that I don’t empathize with the impetus to just unfriend someone if you see sharing something someone is REALLY worked up about and opposed to. Especially right now—who wants to have a blow-up fight when you can’t even go have poke bowls afterward? And if their accounts are anything like mine, they have friends, good friends, and would-die-for-them friends on their Facebook, but also people they met one time at a craft circle or who share a single interest. And that’s not a relationship worth trying to salvage through a fundamental disagreement about something like dismissing sexual assault.

Which is all to say that I empathize, but as someone who has been abused, walked away, been smeared, and then felt like Luke Skywalker getting saved by Han Solo who just showed up and took out Vader when at least SOME of my friends said, “I tried to verify her story, and I think she’s lying”….

BUT ALSO as someone who has been sexually assaulted and can completely see how it would make casting a vote for a rapist untenable, I read these statuses on both sides as silencing and erasing.

“If you speak your truth and it contains nuance I am not interested in, we shall no longer be friends.”

And I guess I have to be okay with that. People have to do their own self-care and make themselves safe in their spaces. And maybe someday I’ll even come to accept that anyone who wouldn’t let me speak my truth on my OWN wall and in my OWN way wasn’t much of a friend. But it hurts to see that from those I’ve peeled off some of my armor around.  I have a feeling that many of the people I’ve seen doing it were caught up in a moment of hyperbole and frustration, and probably didn’t realize the implications.

I’ve tried to write this as gently as I could and from purely my own point of view, and everyone’s mileage may vary, but I guess I’ll find out if I’m summarily unfriended. And I guess I'm going to have to find a way to be okay with that.
at May 09, 2020