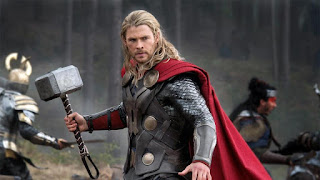 One of my partners likes Captain America. Not just likes the movies, reads the comics, and enjoys the social commentary, but gives that name at baristas and to the hosting staff at restaurants. She can be found dressed up as Captain America when she goes to protests. Cap is kind of her patronus. If you and I are going to go down into the sound-proof bunker, I will tell you that at first I found this a little embarrassing, but when I noticed how much joy it seemed to bring everyone, well, it's hard not to realize it's actually kind of awesome.

It's made me think about my own MCU patronus a lot.

At first, I didn't really think I had one. I mean it's cool to relate to characters, but there are entire franchises with characters I love but don't really resonate with. "I like all the characters." "They are übermenschen and I'm just a peep (and that kind of character has some aristocratic implications when you're talking about a world where you really want to be organizing power to the people, not waiting for someone to fix your problems for you and......)." "I'm not really that into comics." "I guess Cap is okay. He looks jingoist, but he acts more like a pissed off parent who knows his country isn't living up to its potential." "I like Spider-Man. Will Spider-Man show up?"

Then the MCU just kept cranking the movies out.

I found I related to certain characters and their humanesque struggles, and that the characterization of each of them as a metaphor rather than simply a "person with powers we wish were real but aren't" was MUCH stronger, and more tightly crafted than I'm given to understand their portrayals in the comics tend to be.

If I was going to have one at all, I wanted it to be Spider-Man. Oh, I LOVE me some Spider-Man. He's always been a favorite in casa de Chris. Even before I knew that the Avengers existed, I was slinging imaginary webs and keeping Manhattan safe from baddies. I was not that into comics when I was young, but I liked the ones popular enough to be turned into TV shows. Though the animation from the 1967 cartoon was a little too clunky for even very smol me, I don't think I missed a single episode of Spider-Man and His Amazing Friends* and I loved the 90's cartoon. I've seen almost all the movies. (I only missed the Andrew Garfield movies after Tobey Maguire's third left an awful taste in my mouth, and they got lambasted by critics and audiences. One of these days I'll catch them on Netflix or something.) I would beg my friend Shawn to tell me the plot arcs of the major comic book series. I basically have my hand on the button to watch Into The Spiderverse with The Contrarian, asking his parents "Is he old enough now?" "Is he old enough now?" "Is he old enough NOW?"

(*You'll never get me to admit this, but Firestar may have been one of my first crushes.)

And what's not to love? A hyper-agile geek and a nerd with ever a sarcastic quip on his tongue who explores the tension (that we all deal with in our society) that exists around our tacit approval of evil––in allowing bad things to happen when we have the ability to stop them. What could be more relatable in a world where we flat out KNOW slavery still goes on and who is doing it or exactly which companies are destroying the planet. Even now when I'm much older, I relate SO FUCKING HARD to this kid who is so overwhelmed with trying to hold his life together with two hands––who delivers pizzas, has two jobs, can't get to class on time, is barely functional, doesn't even know what self-care is, and should NOT have to worry about saving the world all the time, but he does. Because he has the power to do something about it.

If I could pick...I would pick Spider-Man.

But one does not "pick" one's patronus.

No...it's Thor, actually. This character I didn't really know about at ALL until 2011. I didn't actually SEE Thor on screen until I saw the Avengers. Then I went back and caught Thor, which (if I'm being fanboy-enragingly honest) I thought was sort of like a two-hour version of one of those promotional TV specials they used to make to hype a movie before it came out. (Trust me. It used to be a thing. Though they were usually only a half hour and targeted to kids.) People would tell me about Thor––that he was the actual Norse god (after a fashion) and was in the Avengers, and he just didn't ping my interest-dar. I liked him well enough in The Avengers, but I liked every other character a little more.

But then the movies kept coming out. And I started to realize that as much as I *LIKED* Spider-Man, Thor was really where the harmonic resonance lived.

Here's a guy who would rather have a drink and make a joke. He would rather love and laugh than use Mjølnir on someone's face. He really doesn't want to have to kick your ass, so please sit down and don't be such a frost giant. Sure he's "brave," but it's kind of superficial and what he starts out really wanting is to have everything stay mostly the same for all of time and not have to think too hard about it. And when he was starting out, a little brash and a little arrogant, he may have thought that was mostly possible. But then he learned about putting himself in harm's way for others.

He's got a good heart and good intentions, but is a product of enormous privilege, and often has trouble at first seeing the scope of the problem and possibly even his own unconscious contribution to it. But he learns. His understanding becomes richer and more complex. And at each level of comprehension he tries to do the right thing.

He's an unrepentant jokester, but unlike Spider-Man, there's something not-entirely-innocent in Thor's humor. He weaponizes it to deflect from psychological pain and also to "emasculate*" his enemies.

(*Talk about a word with inherent sexist baggage.)

There's always a big bad, and the MCU is pretty predictable about having an internal character arc that is at least as important, if not more so, than the external conflict, but Thor's character arcs tend to be particularly focused on his own self-knowledge and understanding of what he is truly capable of. There's a concept in Joseph Campbell's Monomyth––mostly recognized as The Hero's Journey––of the ultimate treasure. (Often a sword). In Thor character arcs, since Thor tends to have more "mythological" (get it?) beats in the hero's journey, the Monomyth structure is cleaved to more closely than with other characters. The "ultimate treasure" part of the Monomyth (though it is often a hammer or an axe instead of a sword) is more precisely followed than the Monomyth is with other characters. Thor always learns in the third reel what he really cares about or how the power was really within him all along.

He's loyal to a fault to those he loves. Sometimes forgiving people who really shouldn't be forgiven. He sees the best in people and sometimes they let him down pretty hard.

He struggles (hard and constantly) with the moments in his life he feels like he should have done more.

From the use of humor to deflect and disempower.....to my best moments in life coming when I confronted who I really was or what I really cared about.....to a personal loyalty I've spent some time in therapy learning to turn down from eleven because I'm letting people get away with too much...Thor is like a checklist of me.

And there's a damn good reason writers going off on a tear with the full power of their platform often call that "bringing the thunder." Sometimes I even listen to "The Immigrant Song" when I'm pounding out one of my takedown pieces.

And there's that GIF when I swing "the banhammer" at people from My Facebook Page. (Yes, I even call it Mjølnir.)

But here's the moment I knew it was Thor––that it was always going to be Thor. That I would just have to LIKE Spider-man but "Thor" would be going on my sandwich and barista orders from now on:

Thor struggles with his feelings of self-worth. I mean he REALLY struggles with that. Literally, much of his power that isn't just from being an average badass Asgardian comes from his hammer, which he can only lift if he is being "worthy," and so that's something on his mind ALL THE TIME. I hope none of you have had to live in an emotionally abusive relationship where you have had to deal with criticism, rejection, and attacks on your self-esteem that eventually became your internal voice of self-doubt, but it leads to a powerful feeling that your basic needs, receiving the slightest expressions of love, even your very right to take up space must be EARNED––that you must be "worth" it. Years of therapy have helped me, but it's not a mindset that ever goes away completely. That trauma sticks around. In my life I have convinced myself that I was not worth support, comfort, friendship, or love but when I reached out, those things came to me regardless. In Avengers: Endgame (despite Thor's entire arc being sullied and nearly ruined by what I suspect was a script doctor who thought fat jokes were hilarious) the moment when the lightning flashed to "transform" Thor into his "worthy form" and the only damned thing that changed at all was his beard became braided was for my "patronus resonance" a VERY close second....

But the moment I really knew was when his voice cracked in his own joyous disbelief that despite his trauma, his hammer had come to him. "I'm still worthy."
at December 15, 2019