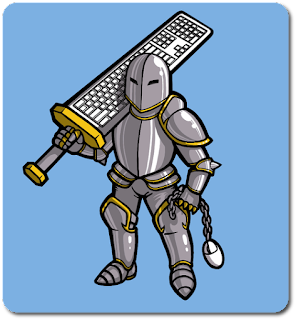 One of the most common complaints I get (usually from people with a lot of privilege) is that I am a "Keyboard Warrior." That I sit here and write and I don't actually get out and do the protests.

For starters that's just not true. But why let a pesky fact mess with a good narrative. After all, it can really take the wind out of the sails of a good, “You people should actually DO something,” rant to find out one is, in fact, doing the something that has been deemed to count. So let’s set that aside for a moment and imagine that someone were JUST posting on social media.

Back before I set my comments to "friends only" on Facebook (and still on many walls of many friends that have not), it was (is) a common sight to see the usual suspects to come out of the woodwork and complain that people should DO something instead of impugning a good social media experience with issues of social inequality and injustice. Actually, that's only partially true. See, it's not the injustices themselves that are upsetting people. It's the fact that so many of their friends are posting about it that has them upset. They aren't nearly as upset about the issue as they are that they have to KEEP BEING REMINDED OF IT when they're looking for cat pictures and Baby Yoda memes. So in fact, most don't care if anything "real" gets done or not. What they actually care about is that they stop being reminded of it.  Imagine being more annoyed by a post you have to scroll past about injustice than the injustice itself.

While I think, in theory, SOME of these people might have an image somewhere in their heads of a truly "proper" way one could work toward equality (that is probably based on the sanitized version of Dr. King), these folks, who have never been to a protest themselves or joined a grassroots movement or so much as told their racist friends "Not cool,” probably have not suddenly been possessed with a keener insight into what makes for effective protest than those who've spent a lifetime on the front lines of fighting for social change.

I know it's hard to believe. But they are not actually experts on what works and doesn't.

For most the real message is "please stop talking about it." The usual sort of SQuiD "shut up" that people who don't suffer inequality are wont to make. Please do this quieter. Please do this somewhere else. Please don’t disturb my comfort. Please be juuuuuuuuust inconspicuous enough that I can easily ignore you. Please move over there…..a little more….just a little more. Great, now I can’t even see you. Perfect.   Please don't ever implicate me in benefitting from the system that marginalizes you or you will hurt my feelings.

Even when this criticism is actually, genuinely sincere (and it rarely ever is), it has the flavor of "concern trolling" baked in. (Gosh, I'm just really SO DARN worried about how effective this tactic might be. You know.....for the cause's sake. For the cause? For the cause! FOR THE CAUSE!!! I want you to succeed, and I'm just so worried that this will make them REALLY mad. I’m just not sure this is the way. I'm really worried about the cause, you see...) As if a person who has never had to face discrimination on a daily basis suddenly woke up and realized that of all the tactics tried for the entirety of oppression, no one had ever tried asking nicely. (We fought a civil war with eleven states who were absolutely willing to go to war to keep slavery, but did anyone think to say ‘Please’?)

Let's pretend for a moment that social media hasn't been cited as the single greatest driving force behind most of the social justice gains of the 21st century, the most effective tool for making people aware of injustice, atrocity and even news since television, and hasn’t even been the literal engines of some actual revolutions in Asia.

[This is because online, all voices are considered equal and there are fewer ways for people in power to gatekeep what they consider important or not. (While this can lead to a lot of “fake news,” it also means that you can find out the thoughts of communities who have historically been silenced. People can't control online forums or social media in the way they can physical spaces, airwaves, or mainstream media.]

Feminism, LGBTQ+ rights, racial awareness–they've all cited social media as a powerful force in their modern movements and efforts. They use them to spread awareness, discourse, and organize. Not despite their failure, but rather BECAUSE THEY WORK! It's called “the democratization of media,” and social media is front and center in the new era.

Let's pretend that cases like Laquan McDonald, Eric Garner, Michael Brown, Ezell Ford, Tamir Rice, Walter Scott, and Freddie Gray would have gotten just as much coverage on mainstream media owned and controlled by powerful corporate interests, and that it was not PRECISELY social media that caused these stories to go viral. Let's pretend that shocking brutality and police reports that conflict with reality did NOT suddenly magically start popping up all over the place pretty much at exactly the same time cell-phone cameras became ubiquitous. Let’s pretend that was a big coincidence and that social media isn’t used to expose what used to be covered up quickly and quietly.

After all, we managed to pretend the same thing a generation ago when we acted aghast that Rodney King got the crap beat out of him, like it was the first time the LAPD could have ever overstepped, not maybe just the first time someone had a camcorder at the right place and time. So let’s do it! Let’s pretend that we would have been just as outraged (and even aware) of these stories if they hadn't gone viral on Facebook and Twitter. Let’s pretend they would have made it past local mainstream news if they hadn’t first been viral on social media. Let's pretend that social media isn't the most effective tool for raising awareness of issues that people who don't own newspapers or TV stations can wield.

Let's pretend that everyone has the same resources, capability, skill sets. That, like you (who....I have noticed are almost always white when the issue is racism, male when the issue is sexism, straight when the issue is homophobia, etc....), these people who ought to be going about achieving justice and equality in the way you have deemed proper have money to donate, physical ability to march, and time to volunteer. Let’s pretend that that it isn't a little bit classist, ableist, elitist, and maybe a few other “ists” to tell someone what the pre-approved way to help humanity is as dictated by someone not really dealing with the issue.

Let's pretend that no one has different proficiencies. There isn't anyone who is maybe better at writing than at working a phone bank, or who is better at reading through dozens of articles and sharing the good ones than at organizing a protest.

Let's pretend that social justice isn't experiencing a renaissance of allyship because of people who have had their eyes opened through social media to their privilege, to the incredible double standards, to how bad it really gets.

Let's pretend that no one who does use social media to discuss social justice issues has EVER had anyone tell them that their words changed their minds, shaped a new opinion, informed them, gave someone else the strength to speak up, or even comforted the group affected by the injustice by showing them entire communities of people in their corner.

Let's pretend that before the days of social media, those who struggled for social equality in the "right way" never needed to interrupt your day, call at dinner, or put themselves in between you and your grocery shopping in an invasive way in order to raise funds for or awareness of an issue. That the social justice warriors of the halcyon days, doing it the "right" way, were always tucked away and easily ignored.

Let's pretend that the "right way" to champion for change has been effective. I mean just look at all this equality. The "proper ways" never suffer from being shut out of spaces by people who don't want to be bothered or marginalized by being called the fringe of a movement or silenced in favor of more moderate voices.

Let's pretend that every grinding, gutting, horrible step forward throughout the entire arc of human history hasn't had an entirely predictable, equally loud contingent of moderates  saying, "this is overreach," "this is too far," "this is too loud," "this is too caustic," "this is too angry," "this too soon," and "this isn't the right way to get what you want." "Sit down. Be quiet. Don't rock the boat. Don't challenge our thoughts. Don't be overbearing. Don't be rude. Watch your tone. Do it only in the ways we deem worthy of attention (and please fail to realize the fact that all those ways we like are the same ones that are most easy to ignore). Do nothing that inconveniences even our FEELINGS and then....THEN maybe, we will deign to consider your redress."

Let's pretend that in all of human history, there was a single instance of systematic social injustice that was corrected by asking nicely.

Oh and also, we’ll have to pretend for a moment that there aren't scams and bait to get clicks and likes and shares. Because for these things to be "absolutely meaningless,” we would have to ignore the incredibly intricate pains people go through to procure them as well as their motivation for doing so.

And not to put too fine a point on it, but you're going to have to pretend that Russian psyops aren't changing the political landscape of the entire world through ONLY social media.

Let's pretend ALL these things...  All of them.

Are you pretending? Okay good.

It's STILL utterly fucking obnoxious to presume what other people are or are not doing in addition to being a “keyboard warrior.” Unless you know for a fact that they're not donating money or volunteering time or that they're helping someone more directly, what you’re really doing is exerting your social capital to try to silence someone.  And even that is only after we do ALL that pretending.

So let's please usher in a new era of SQuiD honesty and simply tell the truth, which is this: "I don't even want to have to FLEX my finger in order to scroll past all this social justice stuff because it clearly doesn't directly affect ME. I would be happier if you would be silent about this.”
at December 14, 2019