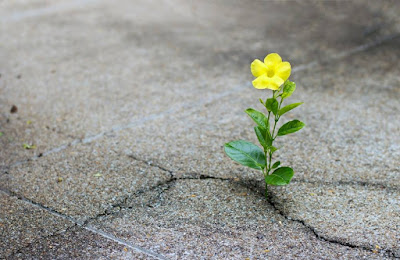 Hope won't leave me. It's there, persistently next to me, like some stray-dog trope in kids media. I know that people are being harmed, persecuted, killed, and will continue to be so. I want to be careful that I don't seem like I'm saying, "We'll get through this okay," because I know some of won't––and some of us didn't survive the past situations that people say we "got through."I'm not trying to silver-lining the cultural clash of our day or say that all's well that ends well. And there are plenty who are hopeless in the face of fascism, right-wing populism, climate change denial, and a world (often literally) on fire. Their feelings are valid too. The world is a complicated place.

Also, having hope that things will get better can lead to apathy. ("The 'arc of history' will save us. No need to actually make anyone feel uncomfortable...") Hope is imagining that we might get from A to Z with tremendous effort. Imagining that things will just all work out is rank credulity.

It's still a hard sell. I'm not a love-will-conquer-all optimist or some bullshit. The world is going to get worse in a particular order and even though it'll hit everyone, it'll hit powerless people first and create millions of climate refugees. Our track record is already horrific, and the right wing populists actively want to be even more cataclysmic in their management of the issue.

But I watch SO many Millennials NOT shifting to "fuck you, I got mine" as they age, and I see companies starting to push for change as their "bottom-line" leadership ages out, and I see people who were naysayers starting to come around to the idea that just maybe they have been duped by billionaires and multi-billion-dollar corporations into thinking that everything is okay, so just relax and work a little harder. I can feel this moment where we are positively VIBRATING with that calm-before-the-storm feeling.....resonating with the first creaking sounds of a great groan as the philanthropic and selfless energy of all humanity slowly turns to face perhaps the greatest threat we've ever collectively faced.

I see all that and I can't kick this feeling that 200 years from now historians will look back and some will cynically say , "They gave up that predatory capitalism and nationalism and went green because they HAD to. It was just a cultural shift like the one they had from hunting and gathering to agriculture or the one from fiefs to industrialization. They had no choice."

Some historians, though...they will frame it differently. "They stood up against people and companies with the kind of power and resources that we can barely even fathom today and literally stood in the path of armies. It was bad, let's not sugar coat it. But they knew the stakes and they didn't give up." That's why we're here today instead of only a tenth of the population living in walled "escape" cities, inland and on high ground."

Realism and pragmatism precludes baseless optimism or some refusal to acknowledge the cost that has and is still coming. And hope doesn't mean it's time to do a huge bong rip and let other people do the work. People with far more hope (and far more reason to be hopeful than of an entire planet doing a u-turn on crashing civilization as we know it) have been, and even died, bitterly disappointed.....