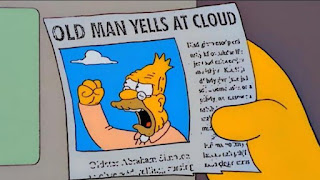 If you've been online in the last couple of weeks, you've probably run into someone who has responded to some criticism of younger folks as coddled or sensitive (or perhaps the idea that the current problems of our time simpy require even more  aggressive capitalism to be fixed) with "OK Boomer."

"OK Boomer" is such a microcosm of our social interactions in the modern era. It works as an overlay to almost any marginalized group that develops a phrase or saying or something to demonstrate that they are fed up with trying to calmly explain how fucking EXHAUSTED they are, handling with kid gloves those who are blaming them for everything.

You see it time and again. A million thoughtful think pieces. A thousand careful provable challenges to the facts that supposedly support the broken narrative being advanced. Hundreds of reasonable debates. Time after time of showing that there's not somehow some magical entire generation that just came out "lazy"––they really have had it harder.

And how far do the marginalizers move? Not one goddamned centimeter. At the end of the day they thank everyone involved in these debates, discussions, and writings for being *reasonable* and turn around and keep saying the same exact thing over and over again. And so the marginalized group, struggling for something more than a satisfying evening of debates, finally shrugs and dismisses them with a phrase about being trash or colonizing everything or being "at it again"....

Once upon a time, there was no choice for these groups but to keep playing nice. Any voice that became frustrated enough to be dismissive was silenced--literally blackballed out of any media exposure. They had to be properly deferential in order to earn the right to describe their own mistreatment. The mainstream had the impression that all these debates were just so reasonable; no one was really upset that the powerful casually voiced their thoughts that the marginalized were basically causing the downfall of civilization by having the temerity to keep existing. Those conversations where groups were just DONE being mischaracterized and blamed went on in coffee houses and bars and almost entirely underground. Now a powerful new medium exists that makes simply erasing and silencing someone a whole lot more difficult. The cultural censure of doubt that someone is capable of relaying their own lived experiences is still there, but you can't just pluck the voices themselves whole cloth right out of the discussion anymore.

For most of the history of mass media, controlling the narrative meant mainstream consumers never being aware that a group had hit the moment of "Fucking DONE." Today, with the advent of SOCIAL media, you can see that flashpoint happen in real time. You can witness the EXACT cultural moment that a critical mass of people in the maligned and besmirched group simply gives up trying to explain their side of the situation, invoke nuance, or appeal to compassion. And now we've seen it over and over again.

"OK Boomer" is the latest in a long line of moments where the marginalized have simply left the table because what is the damned point.

And then the reaction hits.

I watch a five-year-old who likes to either win or REALLY win at every game we play, and I can't tell you how much this reaction reminds me of him. I'll play the games he's invented for a while as he keeps tweaking the rules further and further to his advantage so that it basically becomes impossible for him to lose ("Okay but if I touch this pillow, then I can regenerate and have a shield for thirty seconds, okay, Uncle Chris?"). Finally, I tell him I'm not interested in playing a game that he has rigged to be impossible for him to lose and he gets pretty indignant and reminds me a lot of the way no small number of Boomers are behaving, about being told this one-sided interaction is over.

Just like white people get incensed when BIPOC folks are no longer willing to be "reasonable" explaining why they are upset. Just like men get upset when women just start rolling their eyes instead of carefully laying out systematic and systemic abuse for the gazilligillionth time. Just like folks who've never struggled with their birth gender assignment get mad when being told they are at it again.

Setting aside for a moment that a generation who has told the youth to "grow a thick skin," "stop being so sensitive about everything," and "fuck their feelings, snowflake" for a decade has fallen into the mud crying over something as innocuous as "OK Boomer," and after listening to a lifetime to stories of bootstraps and "sticktoitiveness"––though they came from a time with an entirely different financial reality––there is a spectacular kind of irony in the sheer unmitigated fury and lack of cope on display that being dismissed, ignored, and edged out of the conversation is something they can't control (in EVERY corner of social media) anymore.

It's all that's left.

And like many moments when "all that is left" is finally embraced, it actually makes some folks feel bad. It makes them feel bad in a way that all the reasonable think pieces, discussions, and debates did not. It causes them to pause in a way that, "You are HURTING me!" from the group they were marginalizing simply.....didn't.

In this case it's boomers, but you can see this moment happen along any example. It's all a clever game of intellectual whack-a-mole to the privileged until suddenly someone is no longer willing to play their impossible-to-lose game. 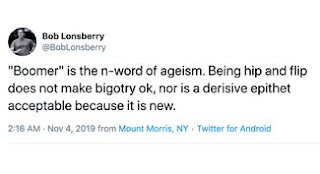 Ironically this moment so often only comes when those at the top of the social hierarchy (in this case the Boomers who still have all the power) feel ignored, dismissed, prejudged, stereotyped.....

It often only comes when those at the top of the social hierarchy experience the tiniest bit of what they so casually inflict on those lower than they without examining that they are doing so. For Boomers it's a casual phrase from those they have spent decades calling weak, unmotivated, and parasites on a consumer economy. (As if the mystery of the stagnant wages was simply too damned complicated to figure out.) This indignation at a simple descriptive phrase or the mere act of POINTING OUT systematic bigotry as "the real bigotry" is also echoed in other power dynamics. Men think that the real sexism is women talking about how they don't like being street harassed. Trans exclusionary radical feminists try to get the acronym that accurately describes them considered a slur. A fair number of straight white guys think the term "straight white guy" is an insult. All because it can sting to have one's privilege challenged directly and unambiguously. 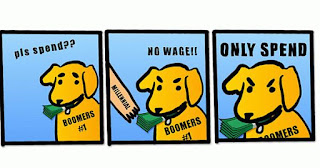 Of course, this is indeed the TINIEST taste of what they dole out. The cosmetic superficiality of being dismissed, ignored, stereotyped, and prejudged without the institutional power is no more than a few bad fee-fees. It is nothing compared to the actual power of cultural hiring conventions, poor media representation (if there is any), the criminal justice system's treatment, the legal power to tank the economy, roll back environmental protections, and send (mostly millennials) to go fight needless wars. All those things the group in power says are completely overcome-able with some bootstraps and "reasonableness."

Responding to more of the same dismissive, intractable arrogance (for it's not like anyone is tossing this out as a conversation STARTER) is just the tiniest taste not backed by institutional power, and they still hate it.

But the demand to "be civil," as with so many other conversations like this, is just centering the feelings  (in this case Boomers' feelings) over lives. 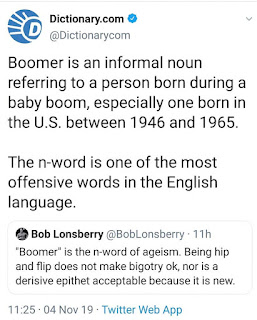 There's a lot of nuance. A lot more discussions are coming, now that both sides "feel bad." A lot of DEEPER discussions are coming. The fact that it is not just possible, but INEVITABLE that the oppressors will eventually become the oppressed when it comes to ageism makes it one of the most dynamic and complicated axes of privilege and marginalization in an already complicated and dynamic set of power dynamics. Boomers are on the very cusp of losing the power in our society and they will almost overnight become marginalized within a culture that often doesn't treat elderly folks like people.

There's nothing particularly new about the "Kids these days" dynamic. We have writings from Plato that say, essentially, EXACTLY THAT. And the kids roll their eyes, go find their own power in the world and the old person who talks about "Back in my day...." becomes a trope. Pretty sure "what EVER?" was the same thing thirty years ago, and that I've seen a couple of grandpas who bloviated about the good ol days in Boomer-created media.

And like "Millennials," which has shifted in common parlance from the actual meaning children born from 1981-1996 to a metonymy that essentially means "these fucking kids today," "boomers" also has its own linguistic elasticity. It means people who are ride or die about capitalism. It means people who have a bootstrap mentality despite a changing economic landscape. It means people who refuse to acknowledge their unearned advantages in a world where -isms and -phobias are very real. It means people who believe in exceptionalism rather than the demonstrable historic legacy of theft and plunder. These features are not unique to an older generation, but they are ubiquitous within. 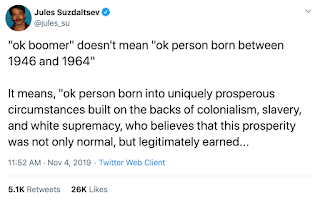 But for the actually '46-'64 Boomers out there incensed, particularly those who spent fifteen years shrugging and looking the other way while Millennials got blamed for, or told to bootstrap their way through, every late-stage-predatory-capitalism thing that went wrong in our society....

For you...."OK Boomer" is your wake-up call. It's the crossroads where you decide how the next ten or so years is going to go.

Like in every generational 80's movie (that y'all fucking made and consumed, by the goddamn way), where the stodgy fuckers from the fifties just didn't GET you, it is time to listen. The oldest of the millennials is pushing 40. You're the ones who still have your children's participation trophies on your walls and in your attics. They grew up in a WORLD that made them lose way more than the occasional soccer game. They were the first generation in a gagillion years to definitively, unambiguously make less than their parents (gen X––which is me, BTW––started the trend but had a lot of exceptions), power from your generation has been relinquished primarily only by being taken from cold, dead hands, and Millennials are tired––oh so FUCKING tired––of being blamed for not keeping the eighties going for another forty years. Maybe, instead of echoing every privileged group's fragility in making it about your FEELINGS, it's time to come to the table in good faith and figure out what the heck happened that an entire generation is fed up enough to feel like it has nothing left to say besides "OK Boomer." 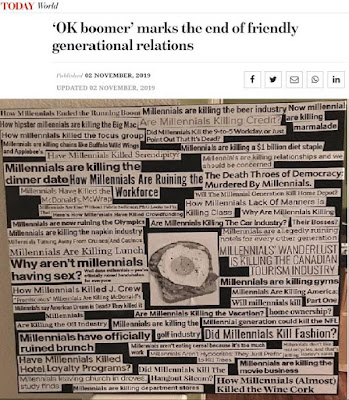