Fascism: You're Soaking In It 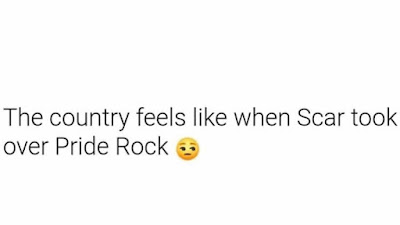 If you've missed the headlines over the last week, Trump is sending his federal enforcers, who answer only to him, to cities run by––in his own words––"liberal Democrats." (Which is any Democrat, in case you've been on vacation for the last four years.) He's so locked into his narcissistic "everyone's against me" thinking that he isn't even attempting to stick to the ostensible bullshit about "law and order" (which, just so I'm mountain-lake clear would be laughable if it weren't so terrifying, given that the best "defense" the lock-armed GOP was capable of mounting during his impeachment was, "Sure he broke the law, but that doesn't mean we should remove him from office.") I mean he tries, but he keeps screwing up and blurting out the quiet part too.
He can dress this shit up like a dog in a little tuxedo, but when you burn away the euphemism and rationalization in an anti-bullshit crucible, what you get is that the President of the United States is mobilizing his military forces, answerable only to him, and invading cities of his political opponents, kidnapping their citizens without charging them or reading them Miranda rights or even identifying themselves. This to attempt to intimidate the shit out of them essentially because they were part of (or somewhat near) a protest IN WHICH PROPERTY DAMAGE OCCURRED, and using an ever more violent and deadly tier of crowd suppression weaponry in an attempt to curtail the constitutionally mandated right of free assembly.
That's pretty much what you see on your TV from some other country when you shake your head and say "Damn shame about [XXXXXXX]. Poor bastards. Shoulda gotten themselves some sweet, sweet democracy."
You know how in some RPG video games you get a prompt before you do something massively unwise?
"Are you sure you want to doom the galaxy to destruction?"
"You will not be able to return to The Capital Wasteland for some time. Are you sure you wish to proceed?"
"Killing this person will end your quest and destroy the threads of destiny. Are you sure?"
You're not going to get that when it comes to fascism. (And just in case it doesn't go without saying, we can't restart from an old save point either.) No prompt will come up saying. "This is your last free and (kind of) fair election. Are you sure you want to play purity politics?" or "If Trump remains unopposed, you will lose abortion, free assembly (except for neo-Nazis), BLM protesters will be rounded up, southern border camps will become a final solution, and there will be a seven-figure death toll due to Covid-19. Are you sure you want to ignore this latest symptom of encroaching fascism?"
You'll never get that. You just won't.

Everyone thinks they are going to know when they see that clear and unambiguous moment when the nuanced politician's eye twitches and they announce the concentration camps (**checks notes** Oh wait, we already have concentration camps). Everyone thinks THEN they will stand up and do something genuinely patriotic about it. Like it's an action movie. ("Time to get my strangely NOT-anachronistic bow and arrow, and end this.") Actually, it's usually historians looking a decade or more in the rear view who come to some absolutely un-unanimous consensus about the tipping point moment.
But fascism isn’t a toggle switch. It’s more like a slider. The US has had "more fascist" moments in its history––like imprisoning protestors of WWI for years without commuting their sentences after the war. And arguably, unless one dismisses the lived experiences of marginalized communities (which most do), the U.S. has always had one foot in the clinical definition of fascism (beyond just the "bad guys" in a WWII movie). Certainly it's been on the rise since September 11th, 2001, and has had a marked upswing since the the current leader of the Republican Party took the highest office.
But we won't ever get a prompt that we've hit the point of no return. For us, in real time, it'll just get worse and worse and there will ALWAYS be some justification for it and some scapegoat group like "liberal Democrats" who make one more and one more and one more step acceptable in the mind of those desperate to rationalize their own apathy.
at July 21, 2020