But They Won't Care 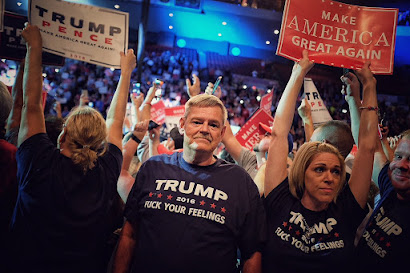 “BUT his followers won't care!” goes the shout every time we point out some new outrage. Whether it’s a brazen assault on free and fair democratic elections or some latest breathtaking display of naked racism. Even when the reason they followed him (his business acumen) proves to be based on lies.

I know they won't. They don't.  He's hitting the notes they want him to hit, and they have demonstrated time and time again that they are more morally bankrupt than one of Trump's businesses, and that nothing––not values, not pluralism, not governance, not reputation, not even facts––matters to them more than winning and hurting "the right people."

They shouted, “fuck your feelings.” And just in case we didn’t understand just exactly what they meant, the minute they were in power, they showed us.

And anyone who might stand against Trump abandoned integrity to make a Faustian deal. They deliberately look away and pretend they can't see what's happening while the GOP stacks the courts, shoves children in concentration camps, milks the wildest and most hurtful conspiracies for cheap political points, rams through tax cuts for the rich, and sabotages healthcare. They are, pragmatically speaking, indistinguishable from a cult. NOTHING will get through to them until they are separated from the cult for a time.

Yes, I totally understand that he has a mid-70s approval rating in the Republican Party (far from the mid-90s he chronically lies about on Twitter). I understand that they're all having a laugh at how apoplectic he makes the "snowflakes" on the left. Considering that pissing us off and fucking our feelings and triggering us was the closest thing they actually had to a unifying, cohesive ideology in 2016, that's not super surprising.

I also understand that he overtly manifested the racism, bigotry, and hatred of the poor–– most of which they barely, if ever, concealed––into an avatar who came out and said all the hateful shit they got tired of having to be "so PC" and tiptoe around. It is obvious that––not DESPITE his mob connections, undisclosed finances, and financial fetters to foreign powers but BECAUSE of them––he symbolizes to them that it is better to be absolutely anything (even a tax evading conman obviously wading in criminal corruption) than to not be rich.

We don't share these stories for "them." They have cast themselves as the victims in their own persecuted narrative and think Obamacare is tantamount to concentration camps (while they ignore ACTUAL concentration camps). We don't think we're finally going to hit the proof or the bridge-too-far moral depravity that makes them turn around and say, "Oh holy shit. What have we done?" Most simply do not demonstrate that kind of self-reflection.

Nothing could be more emblematic of the ongoing and escalating erosion of democracy––first through voter suppression and gerrymandering but now onward and upward to all-but-proven collusion between Russia and his entire staff, collusion with Ukraine that basically even the GOP had to admit totally happened (but just didn’t remove him from office because that would be letting the Democrats win), and now an open and shockingly admitted attack on the USPS to fuck up mail-in ballots…**deep breath**

Okay, you probably forgot where that sentence started since there are so many examples of attacking democracy to list. Let me recap.

Nothing could be more emblematic of the ongoing and escalating erosion of democracy than the GOP's cheerful willingness to ignore–not just ignore even, but to MOCK–a giant and growing body of evidence that Trump will absolutely cheat to win an election. Nothing could be more indicative of their hypocrisy than to spend a decade lauding themselves as fiscally responsible and howling about every penny out of a balanced budget, only to turn around and drop 1.5 trillion on tax breaks for corporations and millionaires in their tax code followed by $500 billion in corporate stimulus for the pandemic––regarding which, Trump assured everyone he would be disregarding any attempt at congressional oversight. Even their patriotism falls apart like wood eaten out by termites. It's little more than a shallow jingoistic facade, a flag draped over discarded veterans, and the seething contempt for the institutions and values (be it law enforcement or democratic pluralism) that they claim to love when the anthem is playing, but turn on like an abusive spouse the minute they're stopped from doing just exactly what they want.

So no, I don't particularly expect they will witness some bit of proof or consequence of their policies and suddenly see reason. They still strongly believe the emperor is wearing full regalia.

But they're not who I'm talking to. They're not who YOU should be talking to either. They have relinquished their right to reasoned engagement. They have abandoned integrity. They have lost all sense of a moral compass. What they defend is indefensible, even if they don’t claim to be capital-B believers themselves.

They are unreachable. No bridge would ever be sufficient. At least no bridge constructed with so much as a shred of compassion for those on the other side who they’ve taken a twisted delight in hurting and killing and laughing at (calling them “identity politics or social justice warriors”) for having the temerity to point out they are part of a group being treated with state sponsored, systemic, systematic violence.

No, they’re not who I’m talking to. They are lost and if they're ever coming back, it will be up to factors I cannot control.

1- Who I am talking to is the  30% of people who COULD vote but are apathetic, and who every poll in the fucking world says lean left. (But who just kind of hate the DNC so much that they sit out civic engagement.) Add a few thousand votes in the right state, and that’s the ball game. [In 2016, the Michigan vote was so close that TWO votes per precinct would have flipped the state. That’s two. One….two. You don’t even have to take off BOTH your gloves to count that high.]

I’m talking to the anti-political machine-rager who might realize that SCOTUS appointments really will have a direct impact on people's lives and rights, expanding them for “religious convictions” and curtailing them for anyone who isn’t a cis, het, white man. I’m talking to those who are (justifiably) incensed that their vote isn't going to fix a system that was built with bigotry baked in, and I’m talking to those who might be convinced that elections still have OTHER consequences––ones that matter. I am talking to folks who don’t realize that unless the revolution is scheduled for the first Tuesday in November, those of us who haven't (yet) been disenfranchised can at least help choose between “politicians who might move the timbre of discourse to the left and make it easier to be a local chapter of a grassroots socialism movement” and “literally fascism that will crack our heads and make survival take most of our time and energy.” I’m talking to everyone who maybe doesn’t realize that even though civic engagement doesn’t always make things better, apathy, always, always, ALWAYS makes things worse. And I’m talking to people to remind them of other avenues to political power and action than MERELY voting––because voting is literally the least we can do.

2- Who I’m talking to is the few of them who aren’t a monolith. Elections are won and lost in swing states sometimes by 1 or 2 points or even less. Peel off one or two out of a HUNDRED from his approval ratings––convince them that maybe there are a few things worse than big scary Democrats running the show for four years––and you don’t need to reach this monolithic “THEY.”

2.5- Who I am talking to is politicians (especially Senators) of “purple” constituencies who May realize that they are committing political suicide to support him through yet another ridiculous scandal.

3- Who I’m talking to is the people who haven’t realized yet that our silence is choice. Any sort of democratic non-blood-in-the-streets revolution that REALLY restructures our society isn't going to happen because we threw up our hands in the face of a tough election and said, "Whatever...THEY aren't listening."

Because of course they aren’t.

We speak truth to power. That’s “them.” They are power. They don’t have to listen and they don’t have to care, but it’s still vital that we speak. We don’t have to be persuading them successfully to not let them us silence us (or more accurately, to silence ourselves and each other). We don’t even have to be talking to “them” to be strengthening and fortifying each other, because this is like a millstone, and it would grind us all to powder if not for each other.

4- Perhaps most importantly, I’m talking to us. I’m not even talking to “them.” I’m talking to anyone else who’s been a frog in the pot for too long. We’re talking to each other. We hold each other up and ground each other and remind each OTHER of the outrageousness we’ve been exposed to for four years. We remind each other, so that we don't grow desensitized to suffering. So that we don’t forget that today’s news cycle is built on a hundred other scandals and outrages before it that we are so tired of fighting but that all happened. So that we don’t succumb to the gaslighting that he did nothing wrong, and if he did then we deserved it. We do it to hold ourselves strong so that we don’t give up. Because "what's the point?” is what they want us to say. They want us to give up and let them monkey-throw feces all over every value we have without making such a fuss.

Who I’m talking to is everyone who needs to be reminded that THIS IS NOT NORMAL. And that we CAN do something about it.