Actually, It IS Who You Are 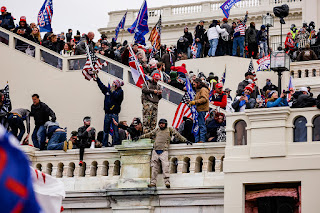 On January 6th there was a coup attempt in the United States.

Technically it was the culmination of a “slow burn” coup that had been going for two months, one that started the night the sitting President of the United States declared victory before all the legitimately cast votes had been counted.

The coup was doomed to fail. It was carried off in a disorganized, half-ass way like everything else this administration has touched, whether it be building a wall or a vaccine roll out. It was primarily executed by an online mob of leaderless Nazis, neonazis, and white supremacists whose sheer sense of white, male entitlement led them to do things like take selfies at Nancy Pelosi’s desk and steal her mail instead of confront the true gravitas of what they were perpetrating. And they were incited by Trump who promised to lead them down Pennsylvania Ave., but instead cowardly ducked away into his bunker and let stochastic agents he had whipped up behave like a leaderless mob. And so, it might be possible to dismiss the day’s events as some sort of mob psychology gone horribly wrong––a lot of angry people who got carried away.

But in the final analysis, what really happened was that an armed insurrection, with malice aforethought, having discussed their violence previously online in forums like Parler, showed up to the seat of government intent on subverting the results of an election* and were allowed in by the police (who thought they were on the same side) in a national security catastrophe. [ETA: That we now know happened because Trump deliberately held back the national guard.]

Just because it went off like keystone capers doesn't make it NOT a coup.

The rest of this is smoke-filled, coffee-house crap, and after-the-fact armchair quarterbacking. The results of the day may have been anarchy, but these terrorists were anything but anarchists. In fact, they had extremely explicit designs about who would govern and how––and in most cases, extremely outspoken ideologies about what sorts of "slow genocide" policies the government would use its power to execute. That's not anarchy.

That the “revolution,” with its decentralized authority, was as incompetent as the very President it sought to entitle, and unfolded in the same epic fail manner as everything else Trump touches, was a stroke of undeserved luck. Had an organized cell with an agenda and a competent leader entered the building in tandem with (and under cover of) the more chaotic insurrectionists, the story could have easily been about Democrats (and Mike Pence) being pulled out of their offices and executed one by one. And in fact, we saw some people clearly had that very intention if they had gotten their hands on anyone they didn't like.

(*I can’t in good conscience say that it was a free and fair election, but the right isn’t interested in the actual problems––like voter ID laws, voter scrubbing, gerrymandering, and the electoral college itself––that make the U.S. a “flawed” democracy in the eyes of the world. Mostly because those things have all been instituted by the right and help them maintain power.)

And now Lindsey Graham, who has never found a Trumpian cause unworthy of providing a few more stock “angry white guy” photo ops, has said “enough is enough,” resignations are happening left and right (including cabinet members), and even Republicans are talking about the 25th amendment. 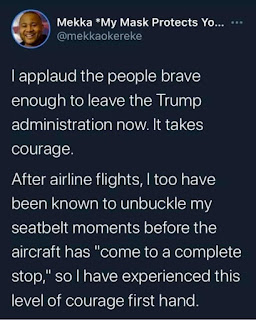 But of course, what I heard over and over from Republican lips was this phrase that reached near “thoughts and prayers” in its meaninglessness: “This is not who we are.”

To all of you, I want to make this crystal clear. I want to make it unswervingly direct. I want no room for ambiguity. I don’t want to be misconstrued in any possible way.

This IS who you are.

Let me say that again: this IS who you are.

Maybe you’re looking at yourself in the mirror or at the consequences writ large of the actions an egomaniac who would rather invoke stochastic terrorism than admit defeat in a democratic election, and the fact that yoking the fascists to win some SCOTUS seats is looking a little too Faustian for your tastes when the bill comes due….

And maybe you’ve decided that it isn’t who you WANT to be, but it IS who you are.

This IS who you are.

IT IS WHO YOU WERE.

And it was still who you were when the violent consequences of your decisions manifested in the form of a group of domestic terrorists and in a way you seem to think wasn’t telegraphed for years. You can’t retroactively uncouple yourself from the ramifications of your long history of behavior in the last few seconds before the culmination like a professional criminal who really only laments the mistake they made that got them caught.

You cannot be complicit in every step leading up to a (predictable) result and then magically exculpate yourself from the consequences. 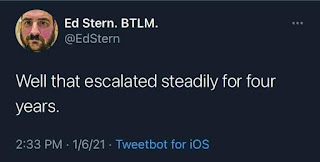 So when you say “this is not who we are” you are in error. At least in the moment you spoke it. This is the just the inevitable conclusion to who you have been for years––for what you have been courting for political gain. This result stood atop the scaffolding you’ve been methodically assembling most of your lives and/or political careers. This is the repercussion that we have been trying to tell you has been inexorably approaching for decades––because, really, Trump was no more than the avatar of all the things festering within the GOP and exploited for political expediency.

This IS who you are!

But it doesn’t have to be.

Now you have to decide, having looked at the naked, inevitable conclusion of what you have wrought, if this is who you want to continue to be. You cannot be John Hammond standing amongst those killed by the dinosaurs and give a glib, "This is not who we are." You chose all the steps that led to this moment. You encouraged it, organized it, and facilitated it. You can't clutch your pearls that some took the next step. And you can't act as if not repudiating these steps won't continue to lead to escalation. If this isn’t who you want to be, then everything leading up to it has to go as well.

If it doesn’t…this IS who you are.