Be Glad Your Housespouse Isn't Union 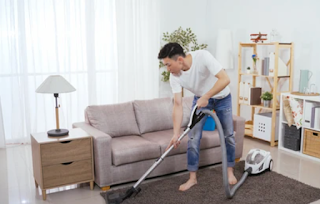 Note: This article is a "refurbished rescue" from the Grounded Parents blog I used to write for. They had to abandon their old site (and many of their old articles) when they moved forward after a "you used my image" scam, but I found it in the wayback machine, and considering that I just tried to figure out how to charge my clients for a 21 hour shift in which I was asleep next to a two-year-old for eight of them, I thought that with a little dusting, a rewrite, and a fresh coat of paint, it was just as relevant today.

[At the time this was written, I was one side-point of a "V" relationship with a married couple, and I was the domestic of the family. These days I still watch the same kid (plus one more) in the nanny situation I'm always talking about, but I don't live in the house. All names have been changed.]

I’ve taken on 20 hours a week of being the stay-at-home caregiver to Tom on top of most of my housekeeping duties, and let me tell you, it has completely changed everything.

I really like my mornings with Tom. Even when he’s being completely inconsolable, filling diapers so quickly I’m not sure how he doesn’t look like a squeezed toothpaste tube, or when he's just sleeping the whole time like a limp rag. It's just us. He's cute and sweet and I have been mind-controlled by his eye-to-face ratio, large head, and tiny chin.

However, I also know part of the reason I love our time so much is that it ends after five hours. When the timer dings, I get to hand him back, trundle upstairs to do some writing, take a nap, or just save a galaxy far, far away from those Sith jerkfaces.

I’m the househusband in this arrangement. The parents of Tom have jobs outside the home, and we keep track of the hours I'm putting in because until a three-way marriage is legal, I lack some of the benefits like health insurance or a retirement plan that I would be co-building even if I were the stereotype-shattering househusband in a TWO-person marriage. From the moment Renee discovered she was pregnant, we knew that the kid was going to have some pretty profound effects on the delicate equilibrium we’d established where I do a few hours a day of housework and they brought home the bacon.

Long before we'd grown comfortable with this equilibrium—for years—we tracked hours, totaled up grocery shopping receipts, watched the incoming and the outgoing carefully. And it just kept coming up pretty even. We would pass the same $20 bill back and forth week after week and month after month, and finally just decided to call ourselves "family," and stop worrying about it.

But then along came 20 hours of babysitting into the mix.

That balance….that equilibrium where my contributions to the household basically equalled my room and board (and some incidentals)…was about to be completely fucked. And because my family is not the sorts to take reckless advantage of me, we all kind of knew we should at least have a rough sense of how many hours I was going over the tipping point. In particular, Renee wanted to keep a watchful eye on the "forty-hour" Rubicon.

“A full-time job is enough,” she said. “Beyond that, we’re taking advantage of you.”

I’d been the househusband (2021 edit: housespouse) for my family for nine years. I’d felt all the clichés of under appreciation for the work I do. William and Renee wondered why it took me so long to clean up, and I’d been in their face that fairies don’t flit into the living room to tidy up their abandoned dishes and discarded socks.

There’s a reason the unappreciated housewife is a solid cliché of TV and movies.

I still had no fucking CLUE how fast 40 hours would blow past with a Doppler effect sound once kids were in the mix. Some weeks we hit it by early evening on Wednesday. Almost every week, I would stop doing housekeeping by Thursday or sooner, just so I'd have a couple of “banked” hours left over in case Renee and William needed some emergency kid watch. Dishes have sat in the sink for days because I hit my limit. Week after week.

The kicker is, I don’t "officially" watch Tom all that much. Five hours a day for four days a week while Renee works outside the home is all that’s certain. I get tapped to help out in the case of a social engagement or just an “hour of solitude,” but I get to give him back. I don’t have midnight feedings or dawn changing or colicky nights. I don’t put the baby down for a nap and then rush to try to clean all the things before he wakes up. I'm not constantly trying to balance his need for attention with how badly the dishes need doing, tossing him into a bouncer and praying that he'll stay distracted for long enough to put on a load of laundry and pick up the living room enough to run the vacuum.

But there have been a couple of weird weeks. Something went wrong. Their jobs outside the house were particularly hard. I had to tag in a little harder. And I did some math and figured out that a full-time stay-at-home parent who also cooked and cleaned would be cruising up around 100+ hours a week. Easily more. Fourteen or fifteen hours a day. Seven days a week. And that's not even counting that nights are more "on call" than they really are "off."

The claims that “motherhood is a noble (even 'sacred') calling" are oft repeated despite all evidence to the contrary. Devaluing jobs traditionally held by women isn’t anything new in our society, but even among folks who would clutch their pearls and whip out their smelling salts at the accusation of sexism, there is still a sense that a family’s breadwinner is doing the “real” work. It is a sobering experience to realize just how much devaluing has gone on when it comes to child rearing and domestic work. While most families find a way to divide the labor without ever feeling the need to track hours, because of my family’s quirky circumstance, I happened to sit down and crunch some numbers.

And those numbers are shocking.

What I discovered is so starkly imbalanced that the absurdity of “traditional” roles is breathtaking. A traditional father putting his feet up and refusing to pitch in with childcare or cleaning because he “worked all day” should probably be aware, according to US labor laws, his wife should be getting about 60 hours of overtime.

That means that even making the federal minimum wage for this "sacred" calling, a housespouse (working a mere 100 hours) would be earning about $1050. (That's overtime for hours over 40 and "golden time" for seventh-day pay.) And if they made the actual going rate for a housekeeper/nanny, got paid for the hours they were on call, and were paid more accurately for the hours in which they were expected to perform duties, they would be making closer to $2000 or more.

That's a six-figure salary even at a devalued wage. Think about what would happen if there was a domestic labor union instead of just this cultural sense that housespousing is the easy job. Which is why it's just a METRIC CARGO CARRIER of bullshit to be saying, "I do the 'real' work" just because we live in a society that refuses to acknowledge unpaid labor as actual work.

Take home?  While a modern family is more likely to flip gender roles, share responsibilities, and approach equity, it might still be worth looking at the clock…just to check.