Debate for Its Own Sake 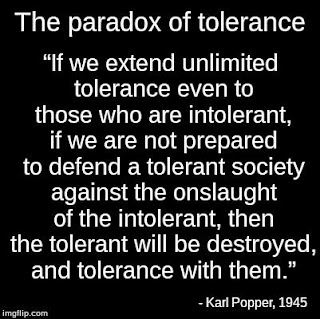 Your (often) white dude friend who will endlessly discuss things. No matter how anathema they are because they value being open minded.

Folks (usually cishet white dudes since they are the ones unaffected by bigotry) who pride themselves on being surrounded with lots of diametrically opposed opinions. They don't grudgingly say "Yeah, that's Mike—he's lower key in person." Or "My dad can see my posts. Sorry about that. I'll talk to him."

Nope. They're proud of it. This is the space they curate. Battle royales over every topic from culture war issues to the body autonomy or humanity of certain groups of people.

Because they are always oh so willing to ENGAGE in the marketplace of ideas over and over and over and over. Each day the same topics, the same boiler plate arguments. No matter how much the underlying premise of some of these conversations hurts someone watching said conversation, they ENGAGE on. Like, say, their OTHER friends on social media watching their humanity be the subject of an intellectual debate) should really make an effort to understand how the SQiD (Status Quo Defender™) works.

See your average SQiD never changes. They begin every "debate" with "Prove to me that is even a problem." They attack expertise. They propose ludicrous narratives in an attempt to explain otherwise clear-as-day statistics. They hit reply with the endurance of Samwise Gamgee when Frodo is in trouble and shout down everyone. They argue from bad faith. They refuse any and all points that would require them to consider that their current world view is anything but utterly unimpeachable. Any counter-argument must be countered with a gush of ceaseless emotional labor.

And if you should ever incontrovertibly "win" such a debate, you will find they often have to depart suddenly. ("Well I have to go…") If they're NOT losing, they'll just come back later. It's only when they can no longer cling to their views without seeming foolish that their obligations must take them away for good.

And whether they quit or stay and let themselves get trounced in public (rare), in the end they announce that it has been very "stimulating" (or "educational")* and thank you as if you just had a vigorous martial arts sparring match with them. They appreciate the discussion, but must depart.

The next time you run into them to discuss that issue again, they have returned to initial positions like it's a new chess match with the pieces reset instead of a growth process.

Which, of course, it is.  It is a GAME to them. It is about winning. They do this because this is exactly what they see "debate" as—an intellectual exercise not to establish truth but to establish who is the better debater (always them).  So they do their favorite opening move: "Prove to me that is even a problem."

And since they never move their "square one," those willing to have that conversation with them ad nauseam are engaged in an endless tango. The debate is not a means to an end (finding the truth or the best idea) . The debate is the end itself. The marketplace of ideas cannot reject any idea. All must begin each day on equal footing, for the marketplace of ideas has no value as a crucible to find the best ideas; it is simply valued for its own sake. It is as if each person's individual social media account becomes an example of The Paradox of Tolerance.

(*This of course is only as long as you never got "emotional." If you did anything they took as not absolutely of perfect decorum, they will refuse your point on the principles of civility politics. Because, of course, they are not interested in figuring something out—the debate itself is what they wanted and you sullied that for them like someone who got mad when they were losing at chess.)

I think some spaces for debate are wonderful, but not every space must reflect the constitutional right one has to espouse harm (in the same way one might decide not to platform someone praising the September 11th attacks); however, in social contexts if you don't learn that actually there are SOME conversations that are absolutely NOT worth having, you will be quagmired there forever as the Status Quo marches on. And those folks who pride themselves having exactly every stripe of friend may quickly find certain of their most marginalized friends unwilling to have the same debates over and over in their spaces. It is uncomfortable and often painful to watch as those one considers a friend happily—PROUDLY— allow one's humanity to casually be questioned over and over like it is a fresh and exciting topic for a rousing intellectual debate (that will never go anywhere). And then, as they leave because there are safer places in the world where they don't have to struggle just to exist, one more place gets overrepresentation by those at the top of social hierarchies.