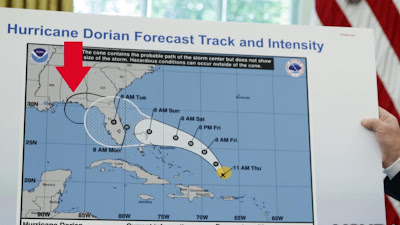 Trump is a liar. Even his most ardent supporters (using euphemisms like "alt-facts" or "loose relationship with the truth” or the even worse “oh it’s just his way”) will admit that. He lies about shit that is not even important and easily verifiable––like what he said on record or that there are clips of. His supporters knew it. They liked it about him (along with the bigotry). They don't value honesty. Perhaps even more accurately, they value dishonesty. Or at least they value dishonesty if it works better than honesty does to achieve what they want.

Trump’s "the lurkers secretly agree with me" lies are not easy to confirm or deny and he's always talking about the "many people" who agree with what he says, but sometimes (like a couple of weeks ago regarding tariffs on China or this thing with the sharpies and Alabama), he just starts making up conversations that he never had with other foreign leaders. Like, you can maybe get away with claiming to have had a conversation if you know the person you're lying to isn't going to immediately go check with that person. We are all guilty of talking up what a hard ass we were or how reasonable we were (when the other person would characterize things very differently), but with Trump we're talking whole cloth fabrication here. Entire conversations with people––easily verifiable––that NEVER HAPPENED. But his supporters don’t care because they don’t value honesty.

Or more recently doubling down on something misinformed until he’s involved in a scandal with the NOAA and threats of firings. You know honesty is not your jam when your ego is so fragile that you have to threaten to fire members of a government body (NOAA) if they don’t back up the lie you’ve already doubled and tripled down on. You know you're okay with lying when a state spending millions for hurricane preparedness means less to you than admitting you misread the "green zone" on a map as being more significant than it is.

And guess what? His supporters STILL like it about him. They like his fantasy. They like his grand conspiracy theories about entire science disciplines trying to make him look bad with a grand coverup and the media that just “never gives him a break.” They like his made-up conversations. They like someone who just gets up there and says something that pisses off the people they hate. They know it's a lie (they do), and they don't care because they kind of dig the lie. The lie upsets the people they don't like. It's like when the bullies all agree to say that it's Wednesday and the more someone tries to prove it's Monday, the harder they laugh. They don't value honesty.

Truth only matters when it gets them what they want or can be used as a cudgel against their opponents (or "enemies" as Trump has now taken to saying openly and often). As soon as it stops working––the INSTANT it isn’t useful––they happily abandon it for deceit and falsity. (Much like open democracy or free markets, but that’s a whole other rant.)

So the whole "Truth will merit out" brigade are bringing knives to a gunfight. Expecting the GOP to gasp when it becomes clear (well, clearER to many of us) that Kavanaugh perjured himself under oath about sexual predation to achieve a lifetime appointment to the highest court is not reasonable. And the tendency for the intelligentsia to think they're going to Snopes their way to Trump supporters one day saying, ”Holy shit. He LIED!” is predicated on values that Trump supporters simply do not have. We say it to ourselves to remind each other that This Is Not Normal, but we are not going to sway those who have chosen their moral values. That’s NOT going to happen.

Email ThisBlogThis!Share to TwitterShare to FacebookShare to Pinterest
Labels: Trump