White Supremacy and the GOP 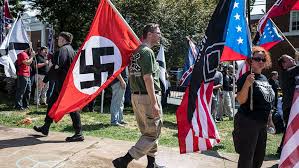 The modern GOP knows that they're sunk without white supremacists and thus white supremacy. That's why that memo that leaked about deflecting blame towards left-wing "extremism" and doing anything needed to pull focus from white nationalist terrorism was written in the first place––if they had nothing to do with white supremacy and didn't want white supremacists in their party, such a memo would be an awfully strange thing to write.

But they do and they do.

They need white supremacists. They can't live without them. Their pencil thin margins of victory (even after all the disenfranchising and gerrymandering and not stopping Russian interference and cheating they can muster) absolutely REQUIRE the white supremacists for political support. They jumped in bed with virulent racism during the Southern Strategy and now they CANNOT win without courting it.

The 2016 election defied the wisdom (of the GOP leadership, I might add) that they could no longer win while focusing exclusively white voters. Basically everyone thought the "wink wink nudge nudge" days of racism had to be dialed back so they could pull more women and non-white voters on board. They were prepared to expunge some of their dog whistling and broaden their coalition in order to survive.

But it was never JUST a strategy.

Instead Trump went all the way in. He dropped the euphemism, just said the quiet part out loud, he won the primary as "their guy" and now they HAVE no choice. If they lose the white supremacist vote, they lose. That's all there is to it. White supremacy, always more powerful than white America would admit, has hijacked the Republican party. THEY are the mainstream now.

That is who the Republicans are now. (That is who they have been for my lifetime with a tacit nod and a conspicuous silence, but now they are out and open about it.) And while some of them don't appreciate having the quiet part said out, their struggles have been superficial and tepid at best. White nationalism is the no-longer-deniable moral stain and legacy of their party all grown up and calling the shots.
at August 21, 2019