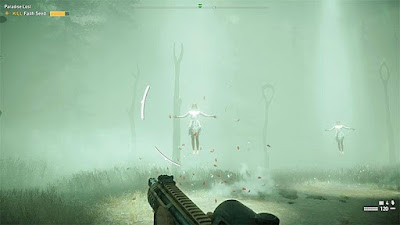 I just finished my second play through of Farcry 5. And I just....

It is a fun and engaging badass game. The mechanics are good, the stealth system is good. The walking-around-with-the-biggest-gun system is good. There are multiple ways to solve most problems. Except for building permanence (which would take a whole new level of game), it feels really realistic on the harder settings. There is a character advancement mechanic that is slow enough to hold interest but powerful enough to put you to work figuring puzzles to get into hidden areas. Every external non-plot part of this game is spectacular.

Shame that it was written by 12-year-old who thought they were being "edgy." The plot was just a trash can fire inside a landfill inferno located on the planet of burning tires.

I could seriously run multiple classes (maybe even a whole semester) on what NOT TO DO as a writer, based on just this fucking game.

Fuck everything about that end. Fuck the conceit that any remotely kind or benevolent God would communicate with a murdering, torturing cultist in a way that they were "right all along." Fuck those weird-ass bliss-induced cut scenes and how they got used to be the deus ex machina of whatever supernatural bullshit boss fights the creators could dream up. (Hey let's have a flying demon? This is a real world game, Chuck. Screw it...make it a bliss hallucination. Sounds great! And at the end they fight all their friends. Wha-- Why would they do that? Um......I dunno....bliss?) Fuck the moralizing about the violence you are forced to commit to save people from being tortured and killed. Fuck the completely untelegraphed nuclear holocaust. (Here's a protip. If you want to have an "It's a cookbook" ending, you drop some hints that things are bad.) Fuck the reverse catharsis ending that took every accomplishment made and relationship forged by the player away for the sake of a "wasn't this shocking" ending. Fuck the attempt to be edgy. And fuck the game for not letting you choke that a-hole with his own fucking rosary.

Honestly, this is the the best ever game I've ever played that if the plot had a face, I would punch it.
at August 10, 2019