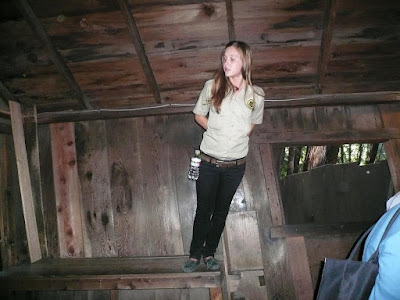 You know those gravity houses? The kind that tip you one way and your mind technically knows what's going on, but you also sort of adjust to it despite yourself. So even though you know why it is working that way, your brain still tricks you and you kind of freak out when it looks like shit is falling up or rolling uphill.

Yep. I'm going to make a metaphor. About Republican cheating. Because we know it's going on, and we've been dealing with it for decades, but our mind also kind of adjusts to it. And when we lose elections by narrow margins, we kind of don't realize we probably should have won. Or when we win, we kind of don't realize that it should have been a blowout.

If you think about how long the cheating has been going on (at least here in the U.S.), you'll realize that the left has actually been winning the war of ideas for a long time––we're just up against those who feel they have a moral imperative and are perfectly willing to toss every underlying principle of democratic government to maintain a minority rule and get what they want.

About twenty years ago, they started computer-assisted gerrymandering to maintain their control. This creates "safe" districts and dilutes the power of their opponents. Then about thirteen years ago, they started voter ID laws, essentially creating a poll tax. Ostensibly this was because of fraud, but in-person fraud is extremely uncommon and the more common form of it (mail in ballots--though still rare) was left alone because the military uses them and they tend to vote conservative. In some places DMVs were even closed en masse to make getting ID far more difficult. Just a couple of years ago, they ramped up the process of purging voters from registrations. These efforts, of course, are ALWAYS in places with certain "kinds" of voters (and it's not middle-class white folks). They are proposed by, endorsed by, paid for by, campaigned for by, passed by and defended in court by conservatives, and overwhelmingly hurt liberals.

You don't need a degree in rocket science to put together what is happening. Just because they've rolled out the cheating slowly, so they win by plausible margins and loose from time to time doesn't erase what they're doing. The room is starting to tilt, and even though we can see it, our brain is also starting to adjust to it despite us.

Yesterday Mitch McConnell stood in front of the American people and openly, shamelessly said with his facehole that they won't pass a law to fix election security in order to prevent interference from a foreign geopolitical enemy we KNOW has interfered, is interfering, and will interfere again and who wants the GOP to win. They won't do this because because free and fair democratic elections would give Democrats "political benefit."

Here. Let me translate that for you just in case you didn't catch it over the sound of all the jaws hitting the floor: "Our prior levels of cheating are not cutting it anymore, so we need this outside interference or we're going to lose."

What surprises me, honestly, is not the behavior of the GOP. I became politically aware during Gingrich's "scorched earth," so I pretty much expect them to lie, cheat, and steal for power grabs at any opportunity. They lost any vestige of personal ethical high ground they may have had thirty years ago when they offered up their integrity on the alter of a Faustian deal to win at any cost––it's just taken this long for most of the country to get the memo.

What surprises me is how many liberals and moderates still act like we have a fair democracy. It's not that they don't see it. It's just that their minds have also kind of adjusted to it a little and it sort of looks like votes are "rolling uphill."

Progressive ideas should be kicking ass, but instead we've got minority rule by a party increasingly willing to hide their cheating in plain sight. And instead of treating them like exactly that, we're still hoping they can be convinced of their own moral turpitude and will have a "coming-to-Jesus" moment.

They have no shame.