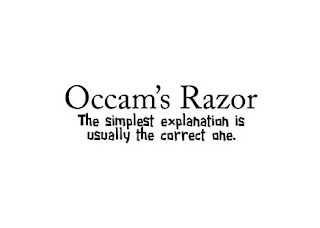 In the 16th century when Copernicus proposed a heliocentric model, it explained everything. (Well okay, not everything. It took Kepler to see that the orbits were elliptical rather than perfect circles, and we've been tweaking it ever since, but MOSTLY for this story, it explained everything.)  This was generally unacceptable to the Catholic church. Christ being born on Earth, that was clearly the center of the universe.

Before Copernicus, astronomers used the Ptolemaic model, but they still had to account for the fact that the planets will go BACKWARDS against the background stars. (This is what it means when your astrologer says your shit is in "retrograde.") They did have an explanation. Epicycles.

Basically they said that as the planets were going around the Earth, they acted kind of like a spirograph.

The problem was, the more data came in, the more the Ptolemaic couldn't explain the motions, but the Copernican model could. So the church kept funding science research that would create epicycles within epicycles to try to explain what was being seen. While this technically explained what was being seen, it would become insufficient and require further explanation almost immediately. However, if one just assumed the sun was in the center of the solar system, suddenly EVERY. SINGLE. OBSERVATION. made sense and fit elegantly. But instead, trying to work backwards from a solution (the home of Jesus had to be the center of the universe), the explanations got more and more and more convoluted.

There's this idea that when you're trying to figure out big patterns, you want the most elegant and simple explanation. (Occam's razor.)

Right now the president is embroiled in yet another scandal. He tweet-attacked another person of color––this time calling the entire city of Baltimore "rat infested" to get to Representative Cummings.

It's not that Trump never attacks white people. Indeed, his best defense seems to be a good Twitter offense (the more offensive, the better) but the THINGS he says about people of color...or women, the LANGUAGE he uses is completely different. He tells them to go back where they came from, says things about infestations, talks about rats, calls people animals, and uses a kind of viscerally deplorable language. You can of course operate from the presupposition that he is not racist, and then you have to have a very convoluted system of "epicycles" to explain his birtherism, his "shithole countries" comments, his position on The Central Park Five, his multiple fair housing violations, his casino floor managers ordering black people off the floor, his quote as saying he hates black people counting his money, disparaging comments about the look of Indians, his calling Senator Warren Pocahontas, his calling Mexicans rapists, slowness condemning white supremacy, his "both side"ism after a murder by a white supremacist during a protest, his telling a judge of Latin descent that he had to recuse himself when it came to building a wall, and of course his latest Twitter outburst, telling four women of color (three of whom were born in the U.S. and the fourth who was a naturalized [the right and legal way] citizen) to "go back where they came from," which is a phrase that is LITERALLY out of the US's racial discrimination handbook.

And some people DO try to explain all of this away. They have an answer for each thing. They have a huge tangled thicket of explanations ("epicycles" within "epicycles") from conspiracies to lies to simple misunderstandings. They start with the result and craft the explanation to fit, no matter how ridiculous and convoluted it becomes.

And the GOP goes right along with him, defending him to the last.

It's not surprising to me that many conservatives are part of Team Epicycles. They dutifully steer the conversation to the race-adjacent issues like "immigration," legislate and create policy with racist impacts but plausible deniability, throw as many smoke and mirrors in front of the fact that we're operating concentration camps within the legal definition of genocide (to say nothing of their complete unethicalness), and make up excuses for one racist tweet after another. After all, they literally walked through the election season praising him for saying what was on their minds. They can't very well come out and say what they are actually thinking. Despite a recent uprising of white nationalism to the contrary, we've pretty well established in our culture that being a racist is an a-hole move.

Or that they are also racists and they are protecting him?

Simple. Elegant. Explains all this disparate data perfectly and can even be predictive about future behavior.

And by the way, this works perfectly with other forms of bigotry too. Want to know why Republican lawmakers care so much about children when they're writing bathroom bills and not when they're running pedophiles on their tickets? Try seeing how elegantly transphobia explains everything. It works with sexism, homophobia...basically any bigotry you can imagine.

Like I said, their behavior doesn't surprise me. They kind of have to play faux innocent, grab plausible deniability, and claim it is something (ANYTHING) else.

What surprises me is how many moderates (and no small number of liberals) engage with their "epicycles" in good faith. Like, if you don't realize by now that you're not ACTUALLY having a conversation about lawful vs. unlawful immigration with a conservative, and that they are actually racists who don't really like brown people, I don't know what to say. It's going to be a very confusing conversation to you with a lot of unexplained double standards and exceptions.

If you haven't "cracked the cypher" that they know full well by now that seeking asylum is lawful and they just don't care. That they are a-okay with "certain" people waiting in a detention facility without basic amenities. And separating children from their parents (even after an injunction) because of minor infractions and traffic violations. That they're going along with the "pretend" discussion that it's all about budgets and laws and citizens grabbed not because they "looked" like they were undocumented (you know why), but that they really did believe all that documentation was forged....it's like having a debate about why epicycles on epicycles wouldn't explain the Ptolemaic model for more than a month or two when it got out of sync when you already know that what explains everything is that sun is at the center of the solar system.

The word salads justifying the need for more and more secret facilities, and the rationalization for broad, virtually unchecked powers of an extrajudicial enforcement agency, and bloated budgets and a big giant wall are this absolute quagmire of mutually exclusive values (like fiscal conservatism), pretense, an incomprehensible resistance to the actual facts of immigration law or criminal justice statistics, and a curiously strong value for the "rule of law" unless it is a judge who has ordered that children stop being separated from parents, and the weird way that nothing ever counts as racism because they say so (unless the exact same happens to white people and then suddenly they have incredibly sensitive racism detectors). This includes (though isn't limited to) saying that things everyone considers racism––INCLUDING THEMSELVES WHEN IT IS ABOUT THEM––isn't really racism when they do it. And "Gosh we don't know why white nationalists and the head of the KKK are so excited about Trump."

Until you look at the data using one simple supposition.

Suddenly, everything becomes clear, crisp, understandable, totally explained, and fully predictable if you simply plug in this one assumption: WE ARE BEING GOVERNED BY WHITE NATIONALISTS WHOSE SUPPORTERS ARE VIRULENT RACISTS.