I Want the Truth! 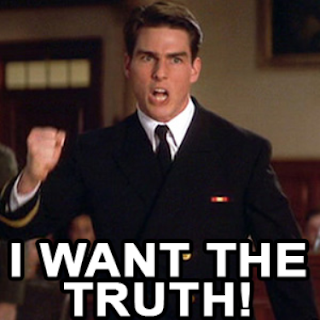 "I just want the truth!"

"He's a Muslim from Kenya."

"I just want to know the TRUTH!"

"I have questions I want answered!"

"It was actually Obama's fault there was a shutdown. He secretly wanted it."

"Let's get to the bottom of this!"

"I JUST WANT TO KNOW WHAT REALLY HAPPENED!!"

"Her e-mail server was sending state secrets to Anthony Weiner."

"I have legitimate intellectual inquiry that I won’t be satisfied about until I know all the facts."

"Hillary Clinton is running a human trafficking ring out of a pizza parlor and advertising it in code."

"I JUST WANT TO KNOW THE TRUTH!"

"Russian propaganda psyops attacks affected our democratic election, and half the major players in the new administration met with Russian agents and at least two were Russian assets. Collusion can’t be proven, but Trump acted in obstructionist ways at every turn. Basically every federal prosecutor says that the only reason he didn’t get charged with obstruction is because he’s the president. We’d like congress to see the full report and interview a couple of witnesses”

“This is just a goddamned partisan witch-hunt. Let’s focus on running the country, m'kay?"
at August 10, 2019