In Any Other Context 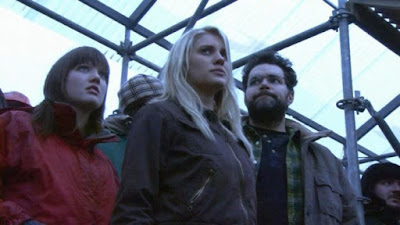 Here’s the thing, and there’s no getting around it.

If you saw ANY other society--in a distant corner of the world, in a dystopian YA science fiction novel, or on a television show--go from having ONE demographic group be completely, utterly, unapologetically, overtly in charge of everyone else (leadership positions, economic power, property owners, and all of them openly, nakedly, saying that they were the superior demographic), to a series of “sweeping" reforms in which that demographic group lost power until they were only about 85-90% in charge of everything. Oh they still ran most things, still held most power, most political leaders were from their ranks, and still had more social standing in virtually any situation. If you saw all this, you would need absolutely NO help to realize how absurd it would be for all the other demographics pushing hard for continued and ongoing reform to be considered "just as bad" when they got frustrated or annoyed, particularly at those who were saying the loss of 10-15% of the power meant that THEY were now the subjugated ones.

That would be ridiculous, right?

Compound this absurdity with the inclusion of violence on only one side. The group struggling for continued reforms speaks out mostly of its experiences in a world that doesn’t treat them as equals. Despite constant attempts to silence them from the dominant group, they are angry, but almost never violent, and the violence it does express is usually property damage when frustrations boil over. In fact, folks within this demographic are themselves most often the ones hurt and killed on the regular, both by open proponents of the demographic that want to be completely in charge again as well as by armed agents of the state that is still run by the dominant group and maintains a criminal justice system that is demonstrably, statistically, and indisputably more brutal and cruel to others than it is to the favored demographic…at every level.

No question, right? This would be piss-easy to “decode.” Like if this were a video game, movie, or book, you would think it was actually a little ham-handed.

You would roll your eyes and know exactly what was going on when the powerful demographic complained about their loss of absolute hegemony. You would need no help to realize how feckless it was of most to value stability and peace and the status quo more than they did the continued reform. You would see right through their attempts to slow things down or to calm those dedicated to change who used harsh language and fierce rhetoric (though not ever the same violence that was used to bring them to heel). You wouldn’t be fooled when the folks in charge held up individuals or small groups from these underclass demographics who said things were great and people should stop complaining.

This would not be a difficult scenario for you to put together. You would have no issue seeing that those who had power were trying to maintain power, and that they were violating the social conventions of civility (that they themselves had created––and which they were more than happy to break with the stroke of a pen, wearing a suit, and sporting a smile) in order to silence those trying to achieve equality. It would be UTTERLY almost PAINFULLY obvious to you observing this foreign society that the levers and pulleys of systematic power were being exploited to KEEP that group in power (or even roll back the existing reforms).

Yet somehow when it’s our own society, the cries that struggles for equality and justice have “gone too far," are actually taken seriously.
at August 10, 2019