You'll Never Convince the Racists That They're Racists 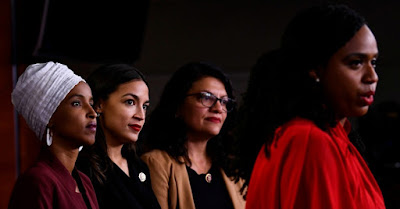 About 30 percent of the country (almost all white) will never admit that Trump is racist. They never ever will. We should divest ourselves of whatever fantasies we might have that some day Trump will do something SO outrageous that they will finally realize it. It is in their interest not to see his racism, and so they will not. Not ever. These people lost the ability to control the narrative that racism is okay (about forty years ago), and so they embraced the secondary ability to smirk and say, "That's not *really* racism."  At least until they can embolden white nationalism enough to come right out and say it as they could before––something they are dying to do.

And the scripts of white supremacy (even on the left) support them. Every time a liberal white person says, "Sure I hate racism, but THIS is not an example of it" to a person of color who is pointing out racism, or a white liberal goes to the mat for a six-hundred-comment thread in the name of "intellectual integrity" to say that some act with racial impact wasn't INTENDED and could have had something (anything) other than stark, naked racism that motivated a person to do something racist, they are enacting this same script. Bigotry is "bad" so no one can ever be labeled as a bigot without some "soulbeam" mindreader bullshit proof. Instead of just acknowledging that we are all racists (even we liberal white people), we all do racist things, we all have work to do, and the people best able to explain it to us are the folks who live with our fucking bullshit every day.

So the well-meaning often provide plenty of ground cover for the smarmy insistence (now that people at the tops of social hierarchies can't just BE bigots) that marginalized people have no say in what counts AS bigotry. Men, white people, heterosexuals, cis...they will be the arbiters of what counts.

And we're NEVER going to convince them that what Trump did is racist because they know EXACTLY what will happen to their entire paradigm if they, even once, say "Maybe you're right." Like Trump himself, there will be no moment where they feel shame. They have abandoned this. Because then they might have to question a lot more than just this one moment of abject racism.

We don't scream and point at every "go back where you came from" or "shithole countries" or his casino records on racial issues or his property records on racial issues or his attacks on the Central Park 5. Or from his followers the "he says what I feel" or the "he's not hurting the right people" or most recently after his comments that four US citizens should go back where they came from: "this is why we voted for him."

We're never going to "prove" it to their satisfaction. That's because we live in a country with an ongoing legacy of white supremacy and a cultural bedrock of bigotry, and it'll take white people confronting that to undo it. Don't forget that the first thing the Mel Gibsons and Paula Deens and Tim Burtons and Hulk Hogans of the world say after they get caught being unequivocally racist is to look at the camera and say, "I'm not racist." That's all that's happening here. It's the Nigerian Finance Minister email that says in the subject line, "This is not spam!"

They have picked their moral quality. We shall never sway them. Time to work around them.

We DO it for the 1 or 2% of those who will peel off from the right. (Maybe who will abstain from voting in 2020 for moral reasons.) We do it for the outliers for whom this might be the last straw. For those who, while I adamantly disagree with them, really ARE Republicans because they want smaller tax burdens and who are not comfortable with the Faustian deal their modern party has made with white nationalists and bigots.

We do it to scream that this is not normal. Or more accurately that it kind of is, but we're not going back to a time when saying it out loud was okay, or that we won't stand up and speak out against the regressive blowback to any vestige of progress. And we're not going to give up until it really ISN'T normal.