This Schedule Already Rocks my Socks! 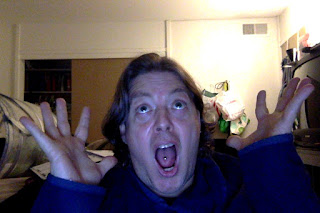 [This got a little long for the FB post it started out as. I'm going to do some navel-gazing about my wonderful, kick-ass new schedule that I can already tell is better than sliced bread and possibly not getting charged the extra buck for guacamole at Chipotle.]

Going in two hours later each day (or an additional hour and 15 minutes on top of the late November adjustment) is going to make a big difference. For reasons I think have about 90% to do with perception, that end of the day has a very "small change, big results"/"fiddle with the knob and get a whole new dynamic" type ebb and flow about it.

I'll be able to really knock out an entire day writing before I have to get to work. If I sleep in, wake up, eat, do my morning routine (which I'll be the first to admit includes too fucking much Facebook), and then sit down to work a little late, I won't immediately have that sense of "WTF just happened? There's no time! I have to crank out some kind of puff piece if I'm going to get out of here by 1:15." Even when I **DO** have to go into work, most days I'll be done in just a couple of hours (instead of five or six) and able to come back and keep going if I wish (instead of exhausted). Plus there's plenty of time for adulting if I need an appointment or something, and not having to figure out what writing to sacrifice every time you want to have a teeth cleaning, get a skin tag looked at, or go take care of your passport is exactly the kind of thing creativity needs to flourish. Our high-octane, late-capitalism world of side hustles, constant productivity, and zero-sum time management is a near-impossible environment for creative thought, no matter how fecund the starting soil.

I also have a feeling that I WON'T do as much Facebook. At least in my experience I won't. I waste time––like really waste it––when "me time" feels like a starvation economy.  When I actually have time and I'm not worried about how much I've got to get furiously get done before I "hop in the shower at 12:30 to be on the road 1:15....", that's when I start having ideas left and right (but mostly left ones *rimshot*) and sitting down in the middle of the afternoon on a lark to just crank out two hours of fiction or something.

I also have a hard cap of 18 hours. The past few months it’s been 30 with most week’s creeping up to 35+ Twelve or more hours a week makes a huge difference. It’s like having an extra entire day.

But sitting here today, I can already tell that the biggest difference will be the three-day weekend every week. I got two days to relax and become myself again (yes, I was just coming back from a vacation, but with high-powered introverts like me, there has to be decompression after travel, no matter how relaxing the time was). Each day I wrote, (for I write every day), but without blog deadlines and productivity demands (and as I mentioned above, ironically wrote more). But then, instead of hopping right back into the grinder with a sense that I had only JUUUUUUUST gotten my various psychic needles out of the red, I get an entire extra day to focus on writing.

I know today is a bank holiday, so I'm joining many in having this three-day weekend, but getting one every week is going to help my creativity, help my quality vs. quantity, and help my output.

I took a pretty big financial chance with this schedule. An expensive month is going to see me dipping into my savings. (And so I take a crass moment to remind everyone that even a small patronage over on Patreon will help me out immensely.) However, that is actually what my 3-year-old Kickstarter is FOR––shoring up a budget shortfall and keeping me writing. I probably have too many money anxieties to sit and watch a savings account shrink month after month after month while staying zen and it was a mistake to think I could, but once in a while, I can talk myself down and put on my oxygen mask.

This will be the most writing-est schedule I've ever had. Technically, it won't be the most writing-est TIME I ever had. For 18 months in my early thirties, my then-spouse supported my quitting my day job. The only thing I had to do was about two hours of housespousery a day. And while I learned a lot and wrote a lot, I did not yet have the tools to make the most of that opportunity––both in terms of my prose skill, but mostly my discipline to stay focused on writing for hours a day.

However, I have never had a conjunction of so much time AND so much ability. If I can keep from worrying overmuch about my finances, it's going to be an explosion of creativity.
at January 20, 2020