Abusive Billionaire Crap (The ABC's of the Modern Political Landscape) 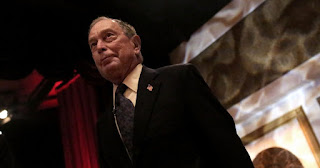 Jokes about Warren "killing him" aside, let me do some real talk. I can't tell you what Michael Bloomberg does when he's not on camera (though an awful lot of people seem to imply that it isn't savory), but when he is on camera....in a national debate, he acts like an abuser.

Bloomberg got up on stage last night and lied. He lied in exactly the same way Trump did way back when he (Trump) still worried that his base might be scared off by fact-checkers.

He lied in exactly the same way in the way abusers do...at least when they're in public.

"My taxes are too complicated," Bloomberg said.

Let me refresh your memory of the exact words of Trump: “It is big. And it is complex. And it is probably feet high. It is a very complex instrument. And I think that people would not understand it.”

But more to the point, even if he DOES release them next week in his right-before-Super-Tuesday surprise to convince worried moderate boomers that he's better than Trump (after all, he probably IS [actually] a billionaire and not a bloated hundred-thousandaire in massive debt to the Russian mafia oligarchs), telling people that you can't be forthright with them because they wouldn't GET it––they wouldn't UNDERSTAND what they were looking at––that’s abuser talk. How many times have you heard that in the mouths of abusers? “Look, I'm not going to justify myself to you. You don't have all the facts." (Unsaid: And I'm not GOING to give all the facts to you. I just expect you to doubt yourself––and I shall live underneath the umbra of that doubt.)

The real one, though, was about the NDAs on women he'd harassed. I don't know what he did, but I can tell you with the marrow in my bones that it was worse than tell a joke that "they just couldn't take." (Women can't take a joke, amirite? JFC!)

That shit where you swing the silencing tactic back around and blame the victim? That's classic abuser.

"Oh...THEY want to keep their stories private," he said.

Michael, do you know what they would have to do if you released them from their NDAs in order to keep their stories private?

That's it. They would just have to go on about their day. They would have to buy some tasty carbonated beverage from Safeway and sit down to sip it while watching The Witcher. That's it. Their stories would remain hidden. If some savvy reporter could even figure out who they were without them actually coming forward, they would simply have to change their response from “Sorry, NDA,” to, “Sorry. Don’t want to talk about it.” NDAs don't protect those women IN ANY WAY. Those NDAs don't protect anyone but MICHAEL BLOOMBERG.

I get that some people see a politician willing to switch their party to run for mayor (and then back again) as literally "as centrist as you can get" but I strongly suggest anyone who thinks that’ he is going to be anything but Trump with a shorter and bluer tie (and a far more Machiavellian mind) to consider the things it says about opportunism, manipulation, and rudderless self-absorption with his own political gain at any cost. We've already seen what the price of those things will be when (not so) deep down in places one doesn't talk about at parties (well, except for the fact that both Trump and Bloomberg DO talk about them.....even to reporters), there is a wanton bigotry displayed for women, BIPOC, trans folk, and anyone with the temerity to "choose" poverty.

Abuse has a social analogue in oppression and marginalization dynamics (complete with its own social forms of gaslighting, honeymoon cycles, and victim blaming) and while there are plenty of people who don't realize what they're doing or are enablers, obscenely rich, cishet white men who think they should be in charge are most likely to fill in the role of the unapologetic abusive partner: "You shouldn't have made me so angry. If you would just do what I tell you, these things wouldn't happen."

My Blue No Matter Who has limits, but frankly that's next season's debate. For now, let me just beg and plead that the generation who looked the other way when abuse was happening across the apartment complex and said nothing during awkward hallway encounters not do the same thing to the whole fucking country. Let's not even GO there, and then we won't have to even have the debate over which asshole could theoretically destroy democracy, marginalized communities, and pluralism more quickly.

Let's not make our decision between two unapologetic abusers.
at February 20, 2020