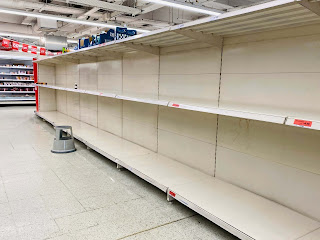 I'm really trying hard not to write about CV-19 for the simple reason that almost anything I write could be WRONG. And usually is by the time the ink is dry (er….the pixels are formed?). Besides which, I swim in the waters of people who do deep nuance, assume the very best faith, and have contrarian streaks, so seeing one bemused post after another about the lack of something the CDC hasn’t recommended we stock up on usually leads to a testy push-back about how they can easily see a scenario in which WE’RE really being the assholes to remark that it doesn’t make a lot of sense that we haven’t seen a paper towel on the shelves in a month. Honestly, it is a testament to their kindness of spirit and generosity that they do not assume that it is mostly selfish prepares hoarding, but it isn't a debate I much care to stroll into because neither point is wrong, per se.

I saw a guy at the store yesterday grab the last three sixteen-packs of TP like he had seen three $100 bills on the ground. But also like everyone around him was just noticing them too and he had to get to them first. He lunged at them. His eyes were on fire. He hunched over them once they were in his cart like he was protecting them. The person next to him, who watched this, had been reaching for one before it was snatched, and instead contented themselves with five of the six-packs.

Once that fierce moment faded, the first guy almost sauntered away, his spoils now safely HIS within his cart. He glared back at a woman, who was giving him a disgusted look, with his intense eyes that told a different story than his nonchalant shrug.

Because it's me, my mind immediately made up a story. One where his stricken neighbor (with CV-19) was going from door to door begging for a roll or two of toilet paper because when they'd tried to stock up (before they got sick), there was none left. And of course TP guy ended up sick from this encounter.

I also bought another four-pack myself. Yep. I can't really judge anyone because I fell right in to that mental space. Not because I needed any. (It's just ME in this place and last I checked I could probably go a few months.) I bought it because I didn't know if, by the time I ran out, these devastated shelves would still be the norm.

I don't know this guy. I refuse to judge one person without much more information. Maybe he absolutely needs 48 rolls of toilet paper. Maybe he has a family of eight. Maybe he’s on a mission to make sure his neighbors have enough too. I just worry that collectively we're not threading some important needles between the kind of stockpiling that leaves others without and the justified act of taking reasonable precautions.

About half the people I saw were ordering fast food, getting handsy, and tra-la-la-ing like nothing was amiss. They would run their fingers up and down the counters while they waited for a worker––one who can't afford to take time off if they’re not simply bedridden––to slide their burger and fries across to them, trying desperately to avoid the contact that the customer clearly didn’t care about. Most of these people looked like exactly the types that would be fine if they got it themselves.

The other half (well maybe not HALF, but the other contingent I noticed) were panic-buying everything in a way I felt myself instinctively WANT to recoil from. A deep primordial urge to back away from these people (more than the three feet I already was) and I actually had to struggle to be in their presence. One guy shoveled twelve or fifteen premade salads into his cart with a wild-eyed look, began to move on to the next thing, stopped, slumped his shoulders and took a deep breath, and then carefully returned all but two.

While I've seen these extremes mirrored online, it was intense to see them playing out in live-body form around me. I think somewhere between our disdain for medical professionals who tell us anything we don't particularly want to hear and many folks’ convictions that a well-informed Internet researcher can be on par with a professional expert, even in a situation where new information is coming out almost hourly, this is going to be very hard on us. Not just because we thought we knew better about our own personal risk assessments, but because some of us are forgetting that we could be out there making things a LOT worse for everyone else.
at March 13, 2020