Be Insufferable or Win an Election. Pick One. 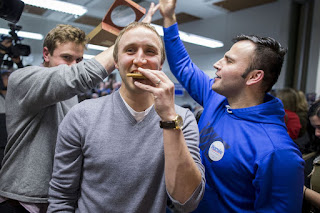 [EDIT: Boy it sure is going to be ironic when the reactions to this post (being exactly what I'm talking about) make me toss my support behind Biden.]

The worst part of democracy is the losing part.

And Warren lost pretty hard last night. (Edit: And has suspended her presidential bid as of this morning.)

However.....while I know that everyone who wants Sanders to go all the way to 1600 Pennsylvania Ave. so badly that they're wetting themselves is going to get a real itchy head from this, I would ask you to consider it loving advice from someone who wants us progressives to do a lot better against Biden than I think we're going to. And just let me say this ONE last thing to the Sanders supporters out there before I pop backstage for a costume change and become one of them:
You have to realize you're trying to win people over, not just win arguments.
This is the only way you.......**AHEM**.......this is the only way WE can win.

This got a little long, so I'm going to make a separate post about a certain subset of Sanders supporters who are particularly difficult online. You know the ones.