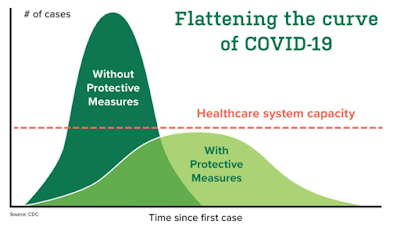 This was originally a Facebook post on my public page but I've reproduced it here. It's gone past a number of healthcare workers with thumbs up. A few folks had things they wanted to add (in the comments if you're interested) but all of them said the post itself checked out.


When I post on FB, I try to keep my Covid-19 posts to jokes and (reliable) news links, and stay well away from trying to speak to things I know little about, but I've seen a misconception more than a couple of times floating around on social media that seems worth speaking to.

As much as I don't want you to get CV-19, I really don't want your nana to get it, and even as much as I (someone with a childhood illness that has already led me to a slightly reduced lung capacity) do not want to get it myself, we are not social distancing so that we stay healthy forever. We are distancing so we do not all end up in the hospital AT THE SAME TIME.

The sobering statistics that I've seen by epidemiologists working for the WHO (like Marc Lipsitch) are that 40%-70% of all of humanity (everyone on EARTH) will have this before we have a good vaccine up and running. And a vaccine may be a year from now, there are likely to be issues, it won’t come out all at once, some people won't vaccinate......

But when hospitals get overwhelmed and start running out of masks and drugs and are full of doctors and nurses who are themselves infected and don't have beds and are out of ventilators..... That's when the death rate spikes and goes WAY higher than that number some folks are still out there charmingly saying "it's ONLY X percent...." What we are trying to do isn't NOT get it. We're trying to flatten the curve of how many of us have it at once.

This is why the administration's criminal dereliction of duty early on will have such massive repercussions very soon.

Because if you are one of those edge cases who can't just tough it out at home (and none of us knows now if we are or not--a lot of hospitalizations are young people), social distancing now might be the difference between getting a bed in the ICU with a respirator and an attentive nurse in August or September or dying in a triage tent that's been set up in the hospital parking lot in mid-April.
at March 21, 2020